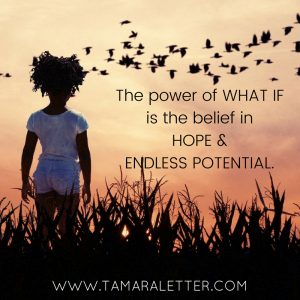 During the ISTE Conference in Chicago this past week, Katie Martin challenged us to answer the question, “What if?” I swirled around this question during her keynote, then posted my response on Twitter:

The power of ‘What if’ is the belief in hope and endless potential! #WhatIfISTE18

Later that evening, as my teammates and I traveled through the city, I pondered this concept of “What if” as I looked at those around me.

What if I complimented the person making my meal?

As a tourist in the city, I knew I would have to order a Chicago style hot dog before I left. Even thought I’m not a huge fan of hot dogs, I was intrigued by the combination of beef, onions, pickles, tomatoes, peppers, and mustard. While visiting Navy Pier, I stood in line at one of the many food stands to order this local fare.

As I waited for the cashier to give me change, I was struck by the precision of the cook who layered each ingredient over my hot dog. When my number was called and my meal provided, I was awestruck at the overlay of colors and textures between the edges of the poppy-seed bun. 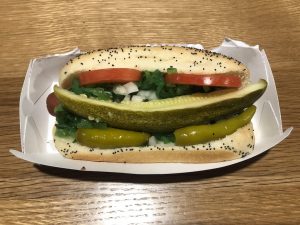 After my meal, I returned to the counter to compliment the cook and saw she was creating an entire tray of Chicago Dogs and I was mesmerized once again by the care she placed in her handiwork. I told her how much I appreciated the time she took into creating these hot dogs, even referencing one of my Grandma Payne’s favorite quotes: “Food always tastes better if it looks pretty.”

I asked if I could take her picture, to which she agreed, and then asked if I could text her the image. I wanted her to see just how beautiful her work was from the view of a stranger. This is the photo I captured in the moment. 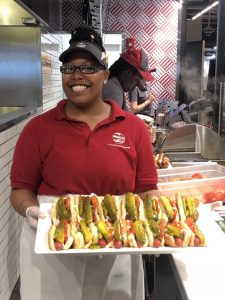 What if I complimented the person making my meal? Perhaps I might make someone else smile at the beauty of their creation.

What if I spoke to a stranger on the bus?

My teammates and I ventured to Navy Pier by bus, enjoying the sights and sounds of the city. When it was time to head back, the weather had changed from warm, sunny skies to a drizzly, bleak rain. It made for a long evening of travel as we switched buses and waited at bus stops, but we huddled together and passed the time chatting and checking our Twitter feeds.
As we boarded our last bus for the evening, we sat near a young man who smiled, but was non-committed for conversation. My teammates and I were in a jovial mood despite the rain (we really are quite a happy bunch together!) and continued to reflect on our day with shared stories that made us laugh all over again.
At some point the young man shook his head and laughed at something we said, so we included him in our conversation. We asked him questions about the city, then giggled when he cracked a few sly jokes of his own. The banter between my team and him was lighthearted and fun, and it made for a great way to pass the time as the bus meandered from one block to the next.
We teased him about his tiger pants which started another round of laughter as one quip led to another, this stranger now a welcomed member of our traveling crew.
He caught my eye and asked if I liked wall art. I wasn’t quite sure what he meant by the question, but I smiled and said, “Of course! I love all kinds of art! Street art, wall art, children’s art…” As I responded, he unwrapped the grey shirt in his lap to reveal a rolled-up paper cylinder held together by a rubber band.
As he removed the binds and unrolled the paper, I literally gasped at what I saw. It was a beautifully drawn face with amazing detail, right down to the perfectly drawn eyelashes.
“I made this,” he said. “Look close at the eyes. There’s a person inside.”
I leaned forward and gasped again as I saw the silhouette of a face in the small pupil of the left eye. It reminded me of the cover of Mandy Froehlich’s new book, The Fire Within, with a flame embedded deep inside.
“This is incredible!” I exclaimed as I peered again at his masterpiece. 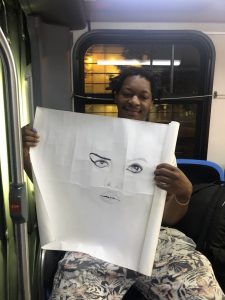 Meet Julius. He’s 23 years old, lives in Chicago, and masterfully kept his artwork dry and safe from the rain using a plain, cotton shirt. He also received the nickname “Juice the Tiger Tamer” from our team who practically adopted him as one of our own.
I encouraged him to take photos of his work and showcase them on social media, then gave him my business card to stay in touch. This young man has potential for greatness and I told him just that. The smile on his face as we went our separate ways was priceless.
What if I spoke to a stranger on the bus? Perhaps I could inspire them to see the talent and greatness they already possess inside.
_______________

What if I gave away something of value?

When our conference time was complete, my teammates and I took the train back to the airport to head home. We each had purchased a 7 Day commuter transit card, but had only used four days. As we reached our final destination and exited the train terminal, all nine of us gave our transit cards to strangers waiting in line to purchase their own.
“Excuse me, do you need a card? It still has three days worth of credit.” 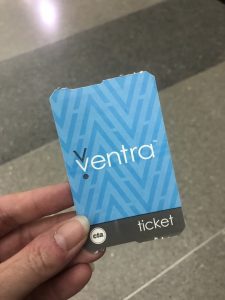 Oh, how I wish I could have captured the surprise and joy on the faces of those who received our transit cards. They were so excited! We saw expressions of awe and appreciation and one teammate even received a spontaneous hug for her kindness.
The entire exchange lasted less than one minute, but left us all with happy hearts. 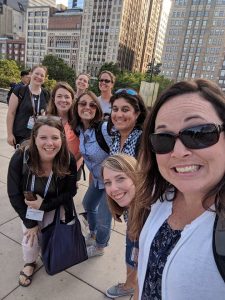 What if I gave away something of value? Perhaps it might lighten the load of someone else who needs to be reminded that there is good in this world.
______________

What if I helped someone at the airport?

Later that afternoon, as I walked down the airport terminal to stretch my legs, I saw a woman pushing a wheelchair with a younger woman inside. I assumed they were mother and daughter and started to look away when I noticed the woman in the wheelchair trying to recenter a rolling suitcase that had unexpectedly turned on its side.
“Let me get that for you,” I said as I rushed to her side with a smile. “Those luggage bags can be tough to pull sometimes.”
There was a slight protest at first, but I reassured her that I really did want to help and it wasn’t an inconvenience. I noticed the mom had her luggage cart wrapped around her arm so she could pull it while also holding the handle of the wheelchair.
“May I have that suitcase, too? I don’t mind.” The mom looked at me, first in shock, then appreciation, as she untangled herself from the constraints of the plastic and metal.
“We’re looking for a place to eat,” she replied and I offered to walk with them until they found a restaurant to dine. The airport was crowded without many options for seating, so I volunteered to scout out the chosen place for a wheelchair accessible table.
I saw a man about to sit at a long, low table, and asked if he was using the two additional chairs at his side. He hesitated, then said he was saving them for two friends. I explained that I was trying to find seating for a mom and daughter in a wheelchair and this table was a perfect height. Could they possibly sit at the end?
He agreed and as I turned to walk away and notify the mom, the most amazing thing happened. Another person sitting near had overheard our conversation and offered to scoot down so the man and his two friends could eat there, thus making the entire table available for the mom and daughter.
It was an incredible gesture of kindness! (I talk about this “kindness trifecta” in the book I’m writing, but it was such a joy to see it happen in person!) The mom wheeled her daughter to the table, then commented on the shirt I was wearing, a gift donated by The Random Acts of Kindness Foundation.
“You don’t just wear kindness. You ARE kindness”
I nearly teared up at her words. 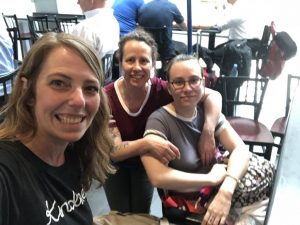 She went on to describe why her daughter was in a wheelchair, explaining she had just received surgery to relieve the excruciating pain she had struggled with since the age of twelve.
Her daughter was 20 years old.
The only cure for her pain was a complete hysterectomy.
The weight of her words and the impact of “What if” could be seen on both their faces. It was a life-changing surgery complete with the range of emotions one might expect from a young woman being told she will never have children of her own in a traditional way.
Empathy and compassion flooded my heart as I looked at her daughter and spoke from the heart. “It’s ok the grieve the loss. Give yourself permission to be sad. Sometimes life is like that. We get tossed major curve balls that don’t make any sense at all and they mess up all the plans we thought our future would be. Your future will still be bright. You will still have joy. It will just look a little different than you thought before.”
The daughter nodded her head in agreement then shared her plan to eventually become a mom through a surrogate. The smile on her face when she talked of being a mom reflected my own heart as a mom of three kids (one of whom is almost her age.) In that exact moment, the world melted away and we were just three women, connected by kindness, sharing the wonders of motherhood.
Hope.
Potential.
Empowerment.
What if I helped someone at the airport? Perhaps it would remind me of all the things I have to be grateful for in my own life. 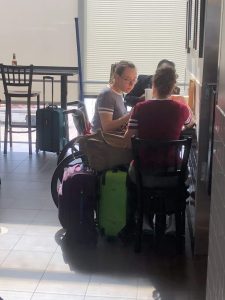 You are absolutely amazing with all the endearing

When your kids send you to “Florida” for Mothe

You are amazing! Never doubt the impact you have o