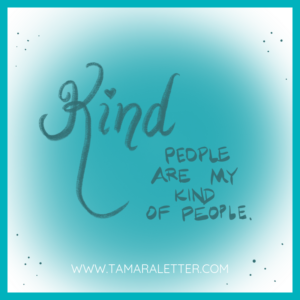 It was one of the coldest mornings we’ve had on Black Friday, with temperatures below freezing, unusual for November in Virginia. My daughter and I set our alarms for 5:30 am and half an hour later we were bundled up in our car, heading to our first store to shop.

The busiest shopping day of the year.

Friends, this is a crazy day in our country. Those of you who live across the ocean or across country borders, may not have experienced Black Friday in America, but let me tell you, it is not for everyone.

There are people everywhere.

It’s not a day for the weak of heart, the claustrophobic, or the impatient. In fact, I think they should include warning labels on the outside of retail windows, similar to those they display in front of roller coasters and high-intensity thrill rides, cautioning those who may choose to continue inside.

Decades ago, I shopped on Black Friday to get the lowest prices possible for presents I wanted to purchase for others. We didn’t have much money to spend on Christmas gifts so the discounts were a necessity, not a luxury. Being a savvy shopper, I would scour the sale ads from the newspaper on Thanksgiving Day, making my list of people I wanted to bless and gifts I hoped to purchase. I cut out my coupons and scheduled my destinations so that I could be thrifty and expedient. Then I would set out in the wee hours of the morning and hope for the best.

Long lines would form around the perimeter of stores whose doors had not opened yet, and people tried not to get trampled when they did. Some chatted while waiting; others kept to themselves.

It made for a really long morning before the shopping even began.

Now Black Friday shopping is different. Online purchasing has disrupted the retail stores’ status quo with many now shopping from the comfort of their homes, avoiding the crowds altogether. Still, for me, there is the lure of being out and about, mingling among the many who choose to do the same. But now, I continue my Black Friday shopping tradition with a twist:

Black Friday is RAK Friday – a day to scatter kindness to strangers.

Our day began at Kohl’s where we went from darkness to sunrise. I told Katrina to find the cutest children’s outfit where we tucked a 15% off coupon in a baby sock for someone else to discover. 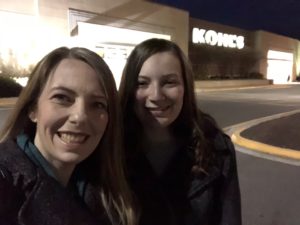 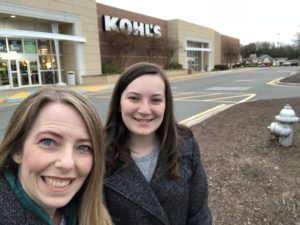 We made our way to Michael’s and Five Below, where I found this adorable “Be Kind” purse. I wrote an uplifting note and placed it inside for the kind person who would receive it. 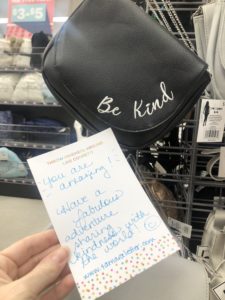 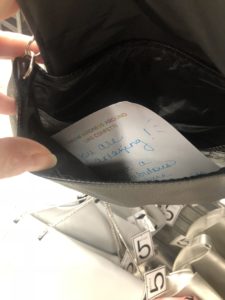 We drove across town to Short Pump Mall, which was quite chilly being an open-air mall. We kept our coats buttoned up as we went from one store to the next. I couldn’t resist stopping in my favorite Barnes and Noble bookstore to make sure some of my favorite books were on display for others to purchase. 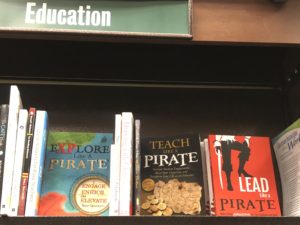 I stood there for a moment, thinking about the joy I will have next year when I can come into this same Barnes & Noble and see MY book on the top shelf (making note to bring a sharpie so I can sign books for an additional surprise to anyone who might purchase it!)

As Katrina and I continued our journey, venturing in and out of the clothing stores, the crowds started to multiply and stores became packed with people. Even the arrows on the floor tried to guide people in forming orderly checkout lines, but to the mere observer it was like a cattle call. 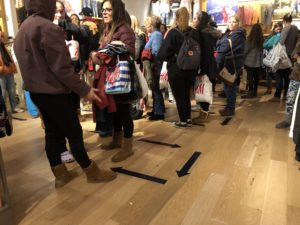 As Katrina stood in line to purchase her items, I wandered around the store looking for ways I could scatter kindness.

I smiled at people.

I held doors open for those with handfuls of bags in their arms.

I found LOTS of clothes that had fallen to the floor, so I took the time to hang them back up – one less thing for the sales associate to do later. 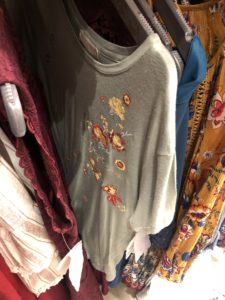 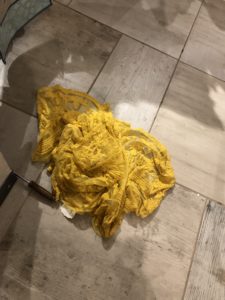 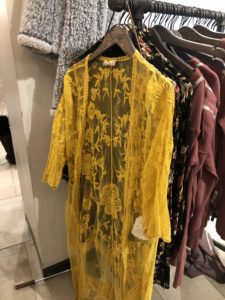 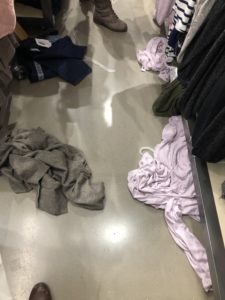 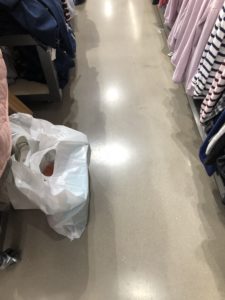 About halfway through our day, we found a Starbucks and stood patiently in a line that extended past the entrance doors. After placing our order, I stood near the barista and watched him adding the enhancements for all the various drinks ordered.

His name was A.J. and he worked nonstop to make sure each drink was made to perfection, his concentration and precision almost an artform.

I complimented his skill which made a smile stretch across his face and we chatted a bit while he continued making the drinks. When he called my name, it was like winning the lottery! 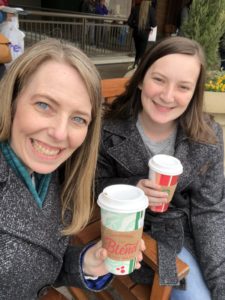 Katrina and I passed by New York & Co. and as soon as I saw the sign on their window, I knew I needed to stop inside. Each year, this store partners with St. Jude Children’s Research Hospital, one of my favorite charities that I wrote about in my book! We found a few items to purchase for others and got in the line that was easily twelve people deep. I caught a glimpse of the gal behind me who had the most beautiful curly hair I had ever seen. I wanted to take a photo, but didn’t want to be rude, so I simply smiled and told her how much I loved her hair. She was surprised by the unexpected compliment and I could tell by the way her eyes sparkled in return that the kind words brightened her day.

And didn’t move an inch.

A sales associate made her way beside our line and explained that there was an issue with the checkout registers with only one of the four working. She offered to take our items and put them on hold so we could return later and skip the line to checkout. Surprisingly, no one took her up on her offer, choosing instead to keep standing and waiting.

About five minutes later, she came back out, her arms filled with water bottles and candy canes. “Hopefully this will make the wait a little easier!” she announced with a smile. 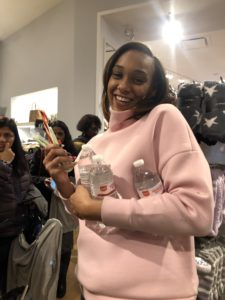 Her kindness was contagious!

When we finally arrived at the front of the line to make our purchases, I was reminded of my favorite charity again, gladly donating a little bit of money to an organization that does so much for others. I even got to ring a bell for my donation! 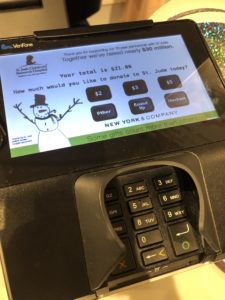 We passed by another favorite store, Carytown Cupcakes, and I decided to pay-it-forward for this marvelous #RAKFriday. I wrote a quick note and handed it to the cashier, then asked to pay for a cupcake I would never eat.

“I want to buy someone a cupcake, but I want YOU to pick out the recipient! Just give them this note when you do the act of kindness – I guarantee it will make them smile!” It was then time to head to another mall. We found ourselves surrounded by cars everywhere we turned, so we drove a little slower, and made sure to allow people in front of us when we could. When we arrived at our destination, I skipped over several closer parking spots to allow other cars to have them instead. It felt great to wave and smile as others realized I wasn’t going to battle it out for the parking space! Besides, what’s a little more walking when we’ve been walking all day anyway?

Entering the final mall, I was delighted to see a candy kiosk on display. I pulled out my quarters and filled the machines, a small surprise that I knew would make any child smile. 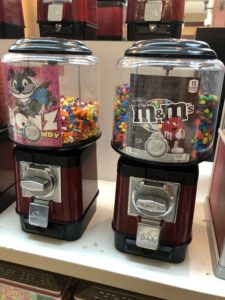 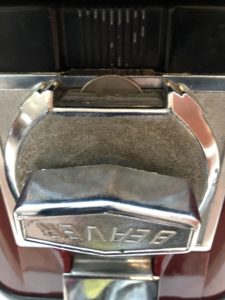 I then searched through the remaining coupons I had in my purse and entered each of those stores, giving all the coupons away to people in the checkout line who might need them. 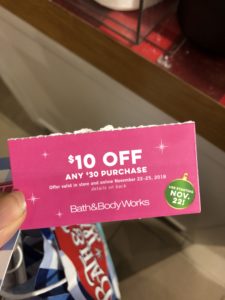 As Katrina and I finished our RAK Friday shopping for the day, we made sure to bring our traditional snowmen cookies home to the boys as a way of letting them know we were thinking of them. 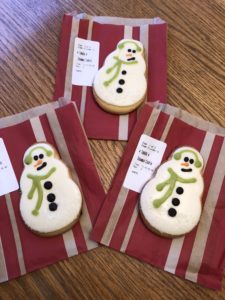 While new media outlets may focus on the chaos and conundrums of Black Friday shopping, we are here to say that it’s one of our favorite days of the year.

A day to be thankful.

A day to remind others there is good in the world. To read more about our RAK Friday adventures, click one of the links below!

We are one holiday closer to my book, A Passion for Kindness, being released into the world! Sign up below to get monthly updates about the book release and additional blog post links, too!

It’s so important now more than ever to support

You are absolutely amazing with all the endearing

When your kids send you to “Florida” for Mothe

You are amazing! Never doubt the impact you have o