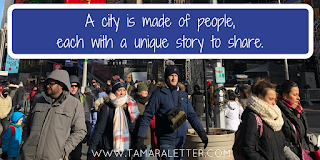 Last week I spent 24 hours in New York City, only my second time visiting the Big Apple. It was a whirlwind trip, a Christmas gift from Grandpa Letter to the granddaughters to see The Rockettes perform at Radio City Music Hall. As one of the two moms, I was just along for the ride.

I constantly joke with my family that I’m a city girl at heart. Oh, how I love the hustle and bustle of a thriving metropolis! I get caught up in the energy of people going this way and that; there’s a unique feeling of being alive in the crowds of people as they go about their daily business.

Now some of you may be shaking your head at the absurdity of my joy and that’s ok. Not everyone thrives in densely populated areas and there’s no judgement whatsoever if your happy place is far, far away from lights, people, and noise. Rock on in your solitude! For me, the city is the place to be.

One of the stereotypes I’ve always heard is how rude people are in the city. Horns honking, people yelling, nobody taking time to acknowledge anyone else. If you are a small town girl such as myself, you might be inclined to agree; after all, the busy city life is a far cry from driving through the streets near your home, waving at people you know.

But I’ve never been one for stereotypes, so they don’t matter much to me.

I made it my mission to break the stereotypes for the short amount of time I was there. As many of you city-goers know, traveling by car can be a bit of a nightmare, so alternative forms of transportation are a must. We did a little bit of everything on our trip. We drove from Virginia to New Jersey. We traveled by train to Penn Station. We took an Uber from our hotel to the heart of the city and walked, walked, walked for miles in between.

One of my favorite things about this trip was chatting it up with our Uber drivers as they navigated through crowds where buses, taxis, and even rickshaws battled for ownership of the crowded streets. I was mesmerized by their expert navigation skills and intrigued at the stories they could share.

I learned their names.

I asked about their profession.

I inquired about their families.

I made the effort to learn about them, because everyone has a story to share!

Today, I have the pleasure of introducing these kind-hearted people to you!

Meet Jared.
He has lived in New York all his life and loves 5th Avenue as “the place to be” for the holidays. He laughed at our novice mistake of walking 10 blocks in the wrong direction, then showed kindness with his words as he acknowledged that the city streets could be confusing. Jared shared his knowledge of the hot spots to see in the city which inspired us to see some new sights!
Meet Jagdeo.
He was born and raised in Guyana and became a jewelry maker in his Caribbean town. His home had 10 acres of land with dozens of fruit trees; just the memory of his homeland brightened the smile on his face. He came to New York City for safety and security. He was fearful from several robbery attempts and knew he could find a better life here. Currently, he lives with his wife and two small children and enjoys his job in the city. The photo above is him showing me the wedding band he made. (He made his wife’s wedding band as well!)
Meet Vadim.
Vadim was born in Russia, but when he was three years old his parents had a choice to move either to Australia or America and they chose America (Lucky for us!) Vadim stays busy with his thriving Uber business and two six year old twin boys (which instantly made me think of my dear friend, Annick!) He often thinks about moving somewhere warmer, but doesn’t want to give up his business as he’s built strong relationships with his local clients. He was a great help giving us the insider scoop on using the Uber app so all six of us could ride in the same car for the remainder of our trip. The photo above is of his boys (he also showed us a photo of his $100,000 Mercedes that he has at home, lol.)
Meet Kevin.
Kevin was born and raised in Brooklyn and has actually been to Richmond, VA! We chatted about his travels up and down the East Coast and what keeps drawing him back to New York City. “You just can’t find any other place that feels like home. All those other cities are just too quiet for me.” He has two young daughters, so we gave him the inside scoop on The American Girl store and laughed about how expensive toys can be.
Each week this month I will be spotlighting the various ways I experienced kindness in the city. I hope this may inspire you to show kindness to others as well! And the next time you are taking an Uber, get to know your drivers! Their stories will bring a smile to your face!

22 years ago this sweet girl made me a Momma! Even

Fall is birthday season! Each week from August to

Whether your children are starting school in perso