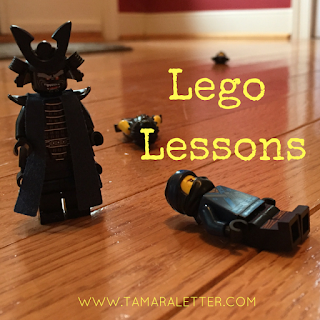 “Mommy, will you play with me?”

His eight-year-old voice rang in my ears as I finished the sentence I was typing, my manuscript interrupted yet again. I could feel the urgency to swish him away with my hand, knowing if I could just write for a little bit more I could finish this chapter. I was so close! The words were flowing so well! Just a half hour more and I could take a break.

I looked up from my laptop and saw him standing there, his small hand holding out a Lego figure that matched the illustrations on his favorite pajama pants. When my eyes raised up to meet his, I knew in an instant how I would spend the rest of my morning.

Instead of writing about kindness, I needed to show kindness to my son.

He guided me to our staircase as he explained the rules of his game.

“Mommy, you sit on the floor over there. You get to put Lord Garmadon anywhere you want, but you’ve got to stand him up. I’m gonna sit up here and slide down the Lego Ninjagos and we’re gonna see who knocks him down. It will be awesome!”

The excitement in his voice was infectious. He was proud of himself for creating a game we could both play and he was certain he would win the first round. I set up Lord Garmadon and one by one he slid his Lego figures down the base of our banister. 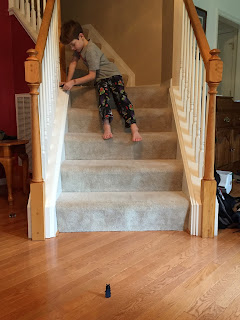 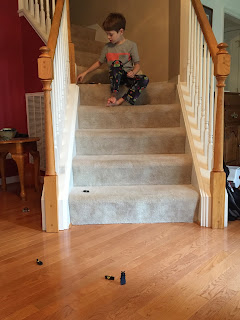 All the Lego Ninjagos were scattered on the floor and steps, yet Lord Garmadon was still standing in all his fierceness. According to the rules of the game, my son and I couldn’t swap roles until Lord Garmadon was eradicated from his reign over the others. He had to try again. 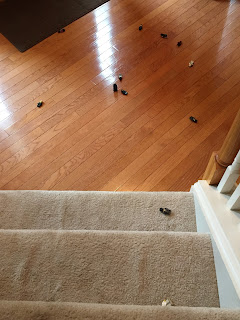 After the fourth trial, his frustration started to show as he exclaimed, “How can this be so hard?” He started to tinker with his strategy. He tried to slide them along the edge. He removed and added weapons. He tried head first, then feet first.
We moved Lord Garmadon to a new spot on the floor, a little more to the right, a little farther back, noticing that this is where most of the Lego people would land after taking flight from the banister. Still no luck knocking him down. 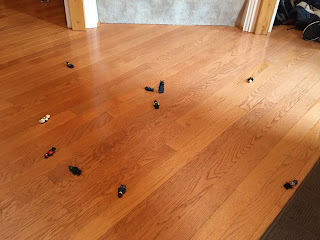 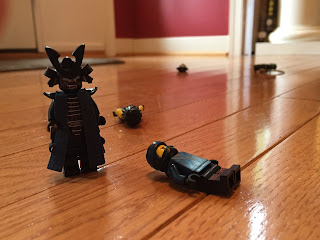 And then it happened.
SUCCESS!
Lord Garmadon fell backwards and my son’s joy reverberated from the stairwell. He did it! He really did it! 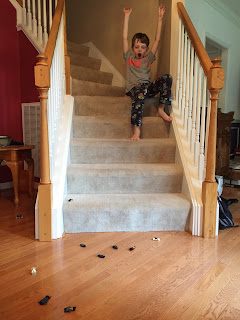 We switched roles and now I was charged with guiding the Legos down the banister. It didn’t take long before my son started offering suggestions for improvement.
“Move that guy a little closer to the edge, Mommy.”
“If you have him hold the nunchucks, they might fly out and hit him when he lands.”
“No, Mommy, don’t take his hat off. If his hat flies off and knocks him down, it still counts as a win.”
We were teammates, helping each other with tactics and strategies. The teacher in me recognized all the things he was learning in his game: the correlation of force and motion with gravity, the mathematical insights of angles, the scientific experiments of cause and effect with dependent and independent variables.
Persistence.
Analysis.
Grit.
But to him, we were just playing a game.
We continued taking turns setting up Lord Garmadon and knocking him down, our game increasing in difficulty as our technique improved. We set him up behind obstacles and used the opposite banister to launch. We had dozens of trials, even more modifications. 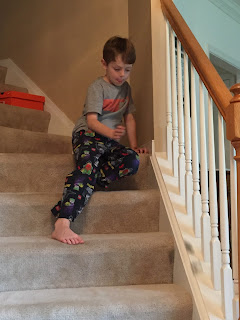 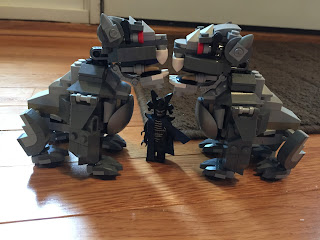 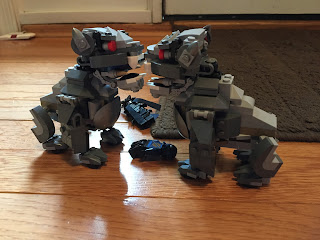 We mastered our game!
I was reminded of valuable lessons from our Lego time together:
It’s OK to lose the first time you try.
A quick win from the start would have shortened the length of our game, but we learned so much more by trial and error. The failures and mistakes showed us what didn’t work, thus narrowing down options for strategies that might.
Embrace the power of “yet”.
Carol Dweck states in her TED Talk “The Power of Believing You Can Improve” (as well as her book Mindset: The New Psychology of Success) that children with a growth mindset engage deeply and embrace the challenge of accomplishing something just outside of their reach. They discover an error, process it, and learn from it. I saw this first-hand with my child and his Lego game. Even when the bouts of frustration started to creep in, he didn’t shut down and throw a tantrum. He understood completely that he hadn’t mastered the game yet.
Sometimes we need to listen to the whisper on our hearts and make time for things that matter.
I didn’t finish writing Chapter 8, but I can always get back in the groove later. I may never get another opportunity to battle Lord Garmadon with my son. He is growing older and there will come a day where he doesn’t play with Legos nor want his mom to join in his fun. It’s important to recognize opportunities to be kind to others (even our own children!), to say “yes”, to shift our priorities, to strengthen our relationships.
Today my passion for kindness was for him.
And like a boomerang, that kindness bounced back to me.