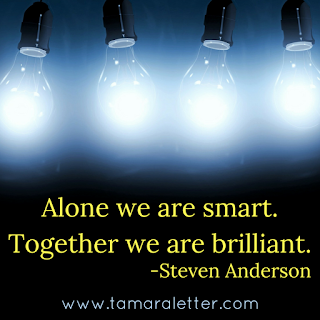 As a child, I was fascinated by big words. I would sing the song, “Supercalifragilisticexpialidocious” and ponder the enormity of such a word with fourteen syllables. When I encountered a new word in my reading, I would pause and wrap it in my mind, looking for patterns in the spelling, searching for ways I could break it down into chunks to spell it correctly in my own writing. I was determined to spell enormous words with ease, but it was a struggle to simply memorize letter after letter to form one complete word.
In fifth grade I received a notepad with “et cetera” printed on the bottom right corner. It was the first time I realized the abbreviation “etc.” was spoken as words and now I could spell it correctly. Wow! The light bulb when off in my head.
A few years later I had an English teacher share her technique for spelling “onomatopoeia.” She drew two stick figures on the board, one named Mat and the other named Poe, facing each other. Then she drew speech bubbles over their heads to show their conversation. That’s when I learned that I was a visual speller, spelling best when I “see” the words in my mind. 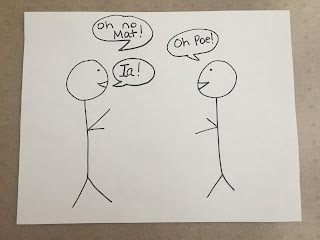 I discovered a love for Scrabble in high school and requested the Deluxe Edition as a birthday gift one year. I felt very mature handling the velvet red cloth bag that held the smooth wooden tiles and begged for people to play with me so I could rotate the game board to them when it was their turn. That same game has since traveled with me through four time zones and nine residences; now my children are discovering the joy of spelling words together.
Today we live in a digital age and the traditional game of Scrabble has been replaced by Words with Friends. Strangers around the world are joining in the game of spelling new words, building one word off the next, sliding letters across the screen.
You can imagine my delight when I discovered magnetic Scrabble tiles we could bring on our trip and place on our Disney cruise cabin door. What better way to engage with other cruisers than to “build” a Scrabble game together?
We placed the letter tiles on the bottom of our door and got the game started with some basic words. 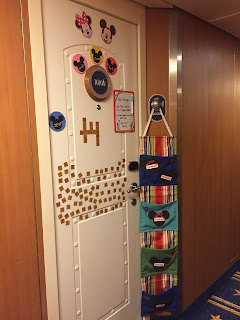 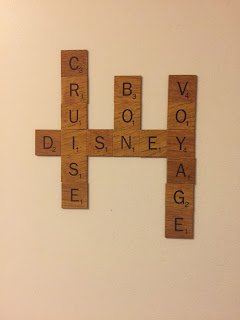 I will admit there was a little apprehension when we began our interactive game with strangers.
“Would anyone join in our game?”
“Would someone place an inappropriate word?”
“Would people think we were weird?”
We quickly dismissed our concerns, deciding it was worth the risk to have a little fun with others.
At the end of the day, we were ecstatic to discover new words on our game board! The surge of excitement in my children was a sight to behold! What word would be added next? Who is playing our game? Children? Adults? Are they having as much fun as us? So we did it the next day. And the next. And the next.
Each day guests interacted with our door. We would catch a glimpse of them as they were passing by, taking a moment to read the words made and adding one of their own. We would see entire families gazing at our door with sentiments like, “That’s so cool!” and “I wish we had thought of that!” One woman even posted a photo of herself playing Scrabble on our door to a Disney Cruise Facebook group commenting about the fun she had creating new words in our game.. 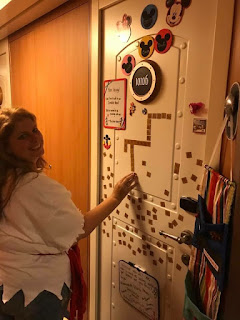 It might seem a bit unconventional to put a Scrabble board on your cruise ship door, but we did it anyway and it was a success! Imagine that!
Embrace the uncertainty. Take the leap. Bring fun into all you do as you take your passions and share them in a new way. You might be surprised how much joy your simple act can bring to someone else’s day!
Below are the results of our collaborative game we “played” with other guests aboard the Disney Dream. To quote Steven Anderson, “Alone we are smart. Together we are brilliant!” 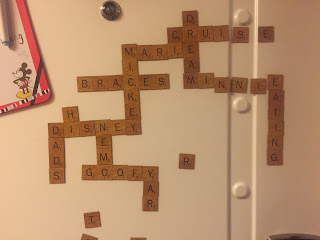 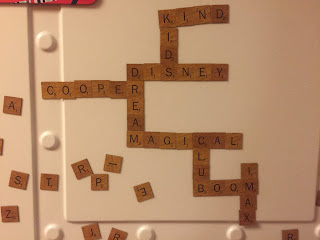 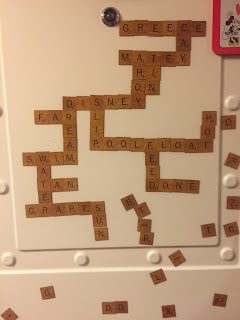 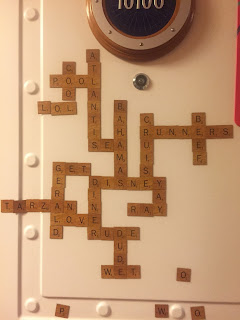 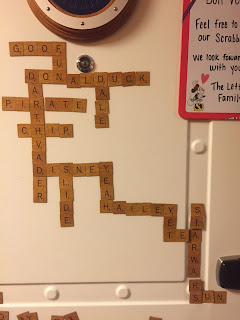 Whenever you see a group of people with one person

It’s such a simple thing, really. Make the decis

This is #momlife joy. I love that my kids enjoy be

Make 2020 a year of radiating joy and kindness to