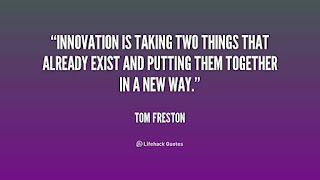 If your child is college bound, their junior and senior years of high school are crucial for making the grade and showcasing your hard work to attract the eye of college admission officers.

Now that my daughter is completing her final months of high school, I feel like I could write an entire book on all the tasks we had to complete as parent and child. (Who knows – maybe I just might write that book after all!)
We’ve visited the college campuses. We’ve listened to the energetic tour guides and walked miles in the summer heat. (Fun fact: I was a college tour guide more than 20 years ago!)
We’ve scoured the websites, attended informational sessions, and marked each email that has arrived in our inbox. We’ve sent the RSVPs, met the college representatives and even been spoiled with a reception at The Jefferson Hotel.
It’s no surprise that college recruitment is a big business; after all, schools need you just as much as you need them. What has been fascinating to me is the ways in which the colleges and universities woo you.
We’ve received handwritten notes, refrigerator magnets, pens and pencils. One school provided a personalized parking space with my daughter’s name for our tour and a T-shirt and cup when the tour was done. 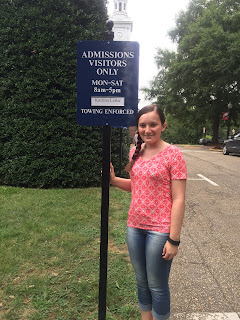 Today we received a unique surprise: an invitation to see the campus using virtual reality (VR).

As a tech integrator, I know that virtual reality has been a growing buzzword, even from my early introduction using Aurasma for student book talks. With the advent of Google Cardboard and 360 degree cameras, the world really is at our fingertips as we can walk, stop, and look. In fact, just last week I worked with a fourth grade class as we explored the surface of Mars using the Nearpod app and a class set of iPads.

Even with those experiences, I was completely surprised when my daughter opened a small package from one of her preferred schools today. Inside was a letter explaining the basics of virtual reality and a Google Cardboard viewer with the school’s logo printed on the front. 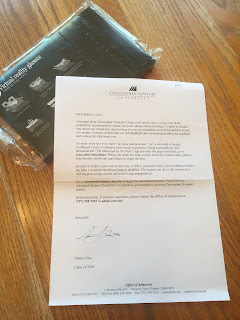 We downloaded the VR Showcase app, put the Cardboard player together (much easier than assembling Ikea furniture, I might add), and placed her phone inside.
Immediately this beautiful college campus appeared in the background with options as to what school we wanted to explore.
All I can say is… WOW!

Talk about stepping up your game! My daughter walked around our living room and down the hall pointing out the buildings of her future home. She was already impressed with this school, but this was like icing on top. Now she can “see” exactly where she will spend her next four years from the convenience of her bedroom. 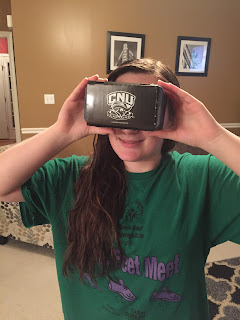 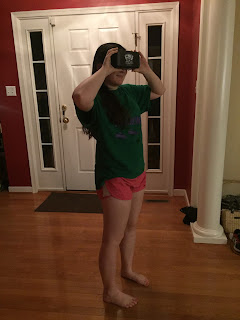 She was even able to showcase her new school to her Grandpa when he stopped by for a visit: 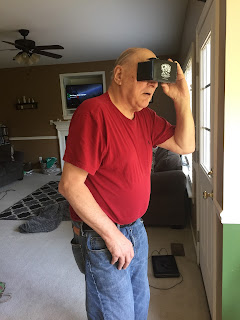 Educators, times are changing and the colleges are keeping up. They have Twitter hashtags and Facebook groups. They want students to showcase themselves in digital portfolios using the ZeeMee app and now they have discovered how to use VR to attract the best of the best.

Are we doing all we can to prepare our students for these experiences?
I would love to hear your thoughts! Comment below or reply on Twitter – let’s learn and grow together!

22 years ago this sweet girl made me a Momma! Even

Fall is birthday season! Each week from August to

Whether your children are starting school in perso