If someone asked you to name your best friend, which name would come to mind first? Maybe your spouse; maybe a childhood friend, a neighbor, or even a relative. No matter who receives that prized designation, they all share the same characteristic.

A best friend is there for you. Always.

Last week, I saw a post in my Facebook newsfeed from the group Reward for Kindness, requesting stories of friendship to share and uplift others. I typed the first story that came to mind, a 3 sentence summary of an act of kindness that still resonates with me, 9 years after the fact. It’s a story about my best friend, Lisa.

A little bit of background information first. Lisa and I met in college at a Zeta Tau Alpha sorority mixer, and the moment we started chatting we just knew that our friendship was a divine setup. 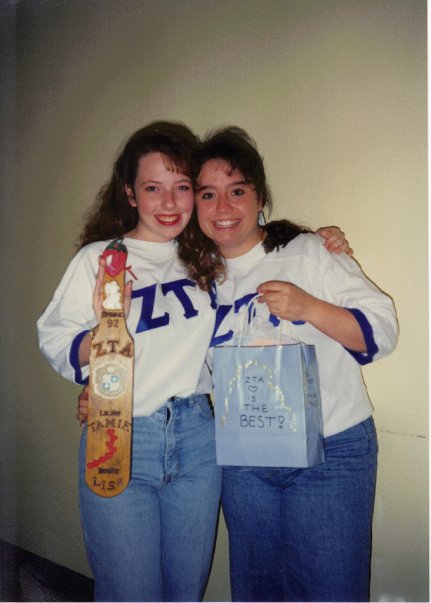 Two decades later, we have shared our lives as friends across Wyoming, Colorado, Florida, Nevada, Tennessee, and Virginia. We have never lived in the same town (other than our college days), and can still recount the days of long distance phone bills that reached triple digits.

She is my forever friend.

In 2006, my life was a whirlwind. A full-time working mother of two children, ages 7 and 2, I was wrapping up my last semester of graduate school, fervently working on my final comps to present to leadership at James Madison University. I was a Differentiation Specialist for a city school district and also the testing coordinator for an elementary school, requiring me to attend additional meetings and manage standardized testing protocol. It was a very busy time of year.

As luck would have it, my baby boy caught a nasty flu bug resulting in a few days of missed work for me. During that time, I slept with him in the spare bedroom as he was suffering miserably and crying all throughout the night with high fevers. Within 48 hours I was down for the count, too.

Now if any of you know me in real life, you know that I despise going to the doctor. I will avoid that place at all costs! I tend to live under my Grandma’s adage: “It’s 90% in your brain, 10% in your body.” I figured I would just drink ginger ale, eat some crackers, pile on the pjs and sweat it out.

I was wrong. Very wrong.

I hated missing work almost as much as I hated going to the doctor, and as soon as my temperature was back to normal, I figured my flu was gone. I was tired and weak, but assumed these were simply after-effects. My return to daily responsibilities a few days later was punctuated by a wincing cough and irregular, often painful attempts to catch my breath. Unable to sit upright, I brought in a small pillow, hoping to rest against the curve of cotton as I tried to do my work unnoticed.

My principal stopped by to touch base about testing and froze in her tracks. She immediately sent me home with a threat to call the ambulance herself if I didn’t go to the doctor. I was taken aback by her abrupt response, but noting the seriousness in her voice, I did as she requested.

I didn’t have a primary care physician as we lived in a very rural area and I was rarely ill. My principal walked me to my car and gave me a piece of paper with directions to a local care center, her beautiful penmanship smeared by haste.

I made it to the door of the doctor’s office right before collapsing in a heap, my breath ragged and weak. At some point I was placed in a wheelchair and my husband called to take me to the hospital; he was already on his way and would be faster than calling an ambulance to pick me up from this rural location. The pain was blindsiding and my inability to catch my breath was creating a panic I couldn’t fathom.

Apparently, my self-diagnosed influenza had disintegrated into severe pneumonia.

At the hospital, I was told my lungs looked like they belonged to an 80 year old smoker, despite the fact that I’ve never smoked a day in my life. Nurses talked in hushed tones; the doctor reminded me how lucky I was to come in when I did. The pain in my chest was excruciating, as if enormous bricks were stacked in a tower on top, bound by cement. They asked me to blow in this crazy contraption that looked like a cup with a straw at the bottom… I couldn’t make the ball lift even a centimeter.

It was one of the few times in my life I felt completely helpless.

My husband made the required phone calls since we lived several hours away from family and friends. They were in shock (as was I) that I was not only hospitalized, but in such a debilitating condition. It was surreal.

And then, less than 24 hours after I was wheeled in, I head a knock at my door accompanied by a very familiar face. “You know, if you wanted me to bring you mashed potatoes, you could have just asked.” It was Lisa, who had dropped every obligation in her world to drive more than 4 hours to see me in the hospital. She carried a plastic container with steaming veggies from Cracker Barrel, which made me laugh and cry at the same time. Only she knew that mashed potatoes were my “stress-eating” food of choice, my miracle meal for healing.

I hadn’t seen her in such a long time; her laughter was a salve for my illness. The visit was quick, too quick, but she had to return home, another 4 hour drive ahead of her. We shared a hug and I was reminded again of the power of true friendship.

Nine years later, my name was selected in a random drawing to celebrate my best friend. 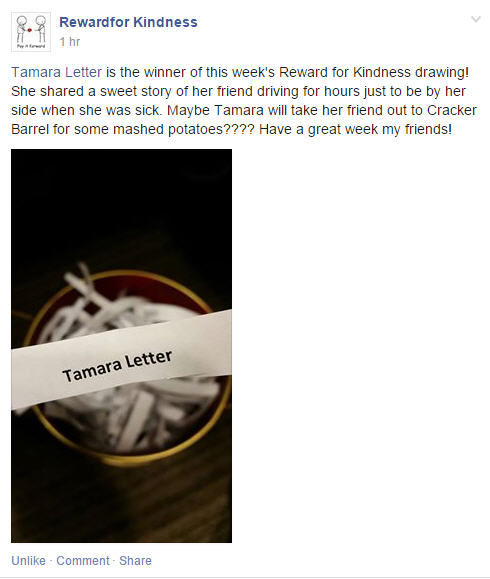 This week we lost a classmate in a tragic construction accident. It was a brutal reminder that our time here is short. Limited. Precious. We have such a small window of opportunity to show kindness and love to those around us. Take the time now while you have it. Be the friend you would love to have. When you see someone in need, rearrange your schedule to be there for them. Tell them how important they are to you. Show them how much you love them. Such small acts of kindness will have a lasting impact on others; you never know when your actions will be a lifeline for someone else.

And if you have to travel several hours in the process… don’t forget the mashed potatoes. 🙂 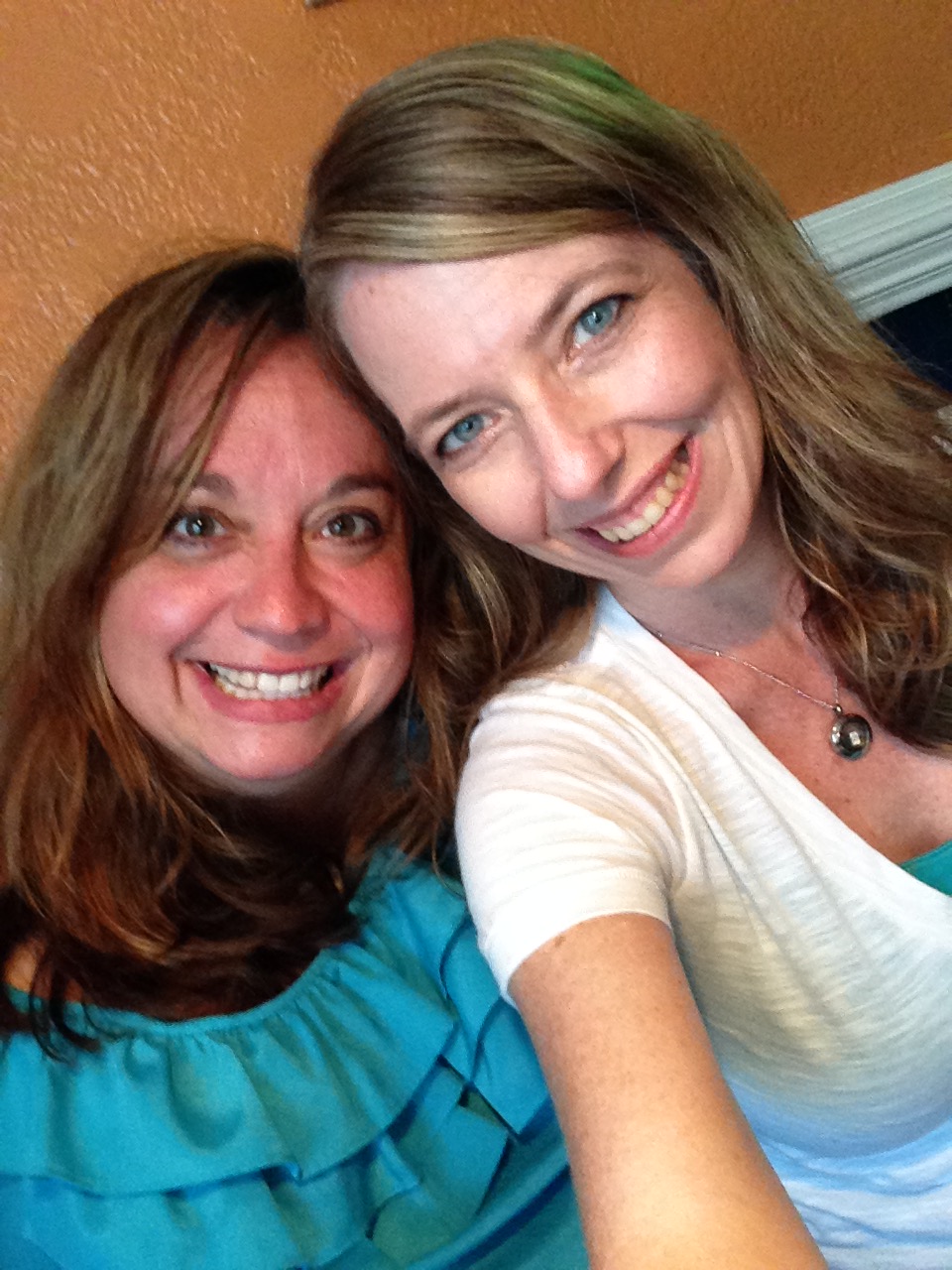