Summer storms are a pretty common occurrence around here.  While we don’t live in Tornado Alley, we’ve seen some pretty wild thunderstorms, complete with high winds, hail, even a tornado or two.  Usually we are taken by surprise with these pop-up storms, only realizing an approaching storm is near when the skies darken and the wind makes the trees sway.

Last week, as my husband said goodbye to fly to California for his cousin’s wedding, I was sitting on my front porch enjoying the late afternoon summer sun when the thick clouds rolled in from the west.  “Time to bring in the chairs,” I thought to myself as I quickly put away the kids’ toys and random chairs we had out in the front yard.  I got inside just as the rain started to pour.  “Whew! I made it!”  My youngest son was napping on the sofa while my oldest son continued to navigate his way through another level on Minecraft.

For those that know me best, you know I LOVE severe weather.  I have since I was a little kid!  A self-professed weather geek (among other things), I have already added “storm chaser” to my never-ending bucket list.  I love to watch a storm, whether a hurricane, snow storm, or steadfast rain.  I am awestruck by the power of nature.

This storm was no different.  I hunkered down on my sofa to watch the storm through my back window, mesmerized by the gusts of wind now blowing leaves and gumballs across my yard.  The sound of nickel sized hail hitting my window made me hop up to get a better view from the front bay window.

My oldest son joined me as we watched the lightning crack through the sky.  We watched in wonder at the shift in weather which had been so calm only ten minutes before.  I noticed a huge tree limb down in our front yard right about the time a strike of lightning flashed violently through our sky, causing me to shriek as we both pulled back from the window.

The storm continued to rage outside the safety of our home, but it stopped as quickly as it began.  Usually we are the first of our friends to lose power in such a storm, but for some reason we were the lucky ones as our lights continued to shine through the darkness of storm clouds rolling away.  I carefully opened the front door and was shocked to see my yard. 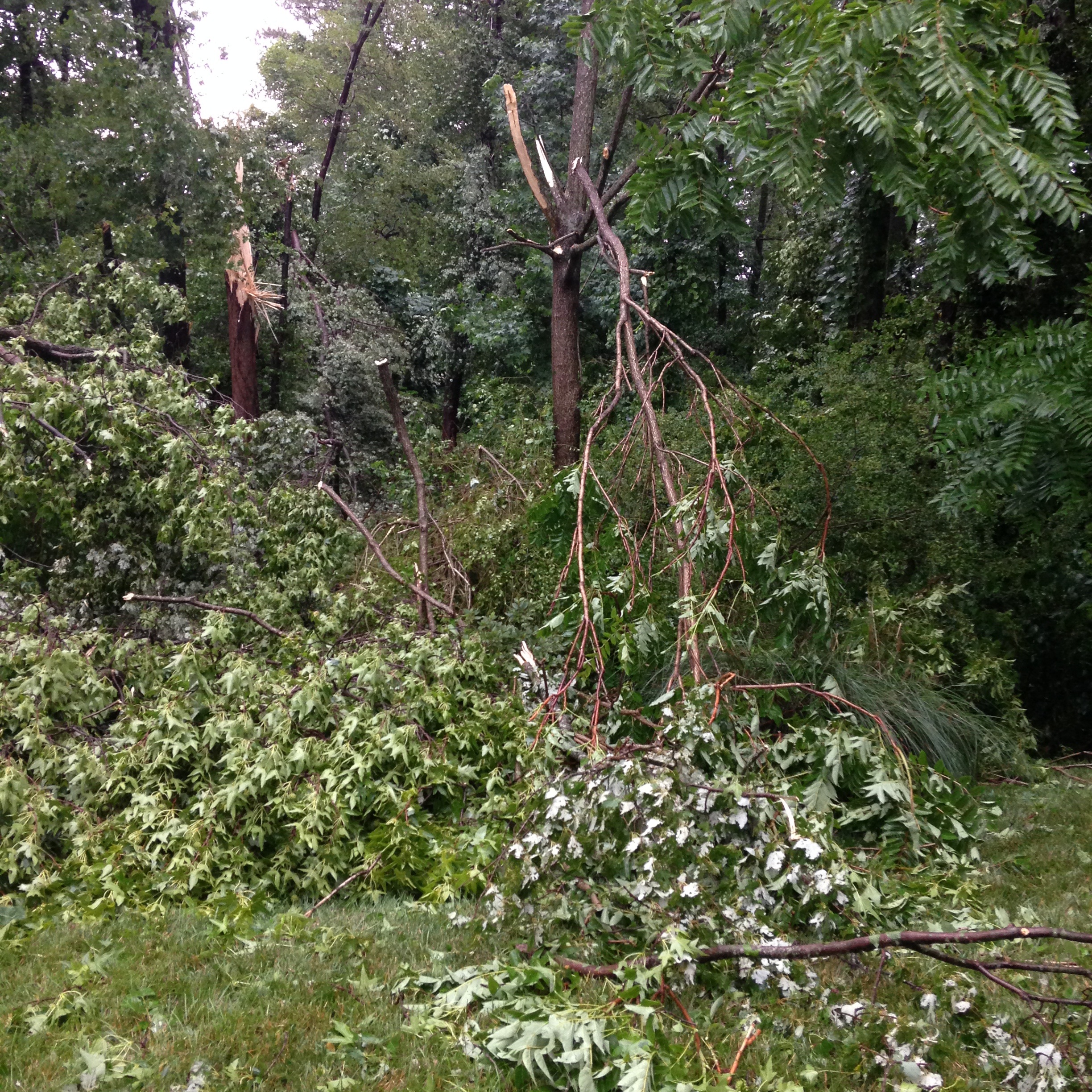 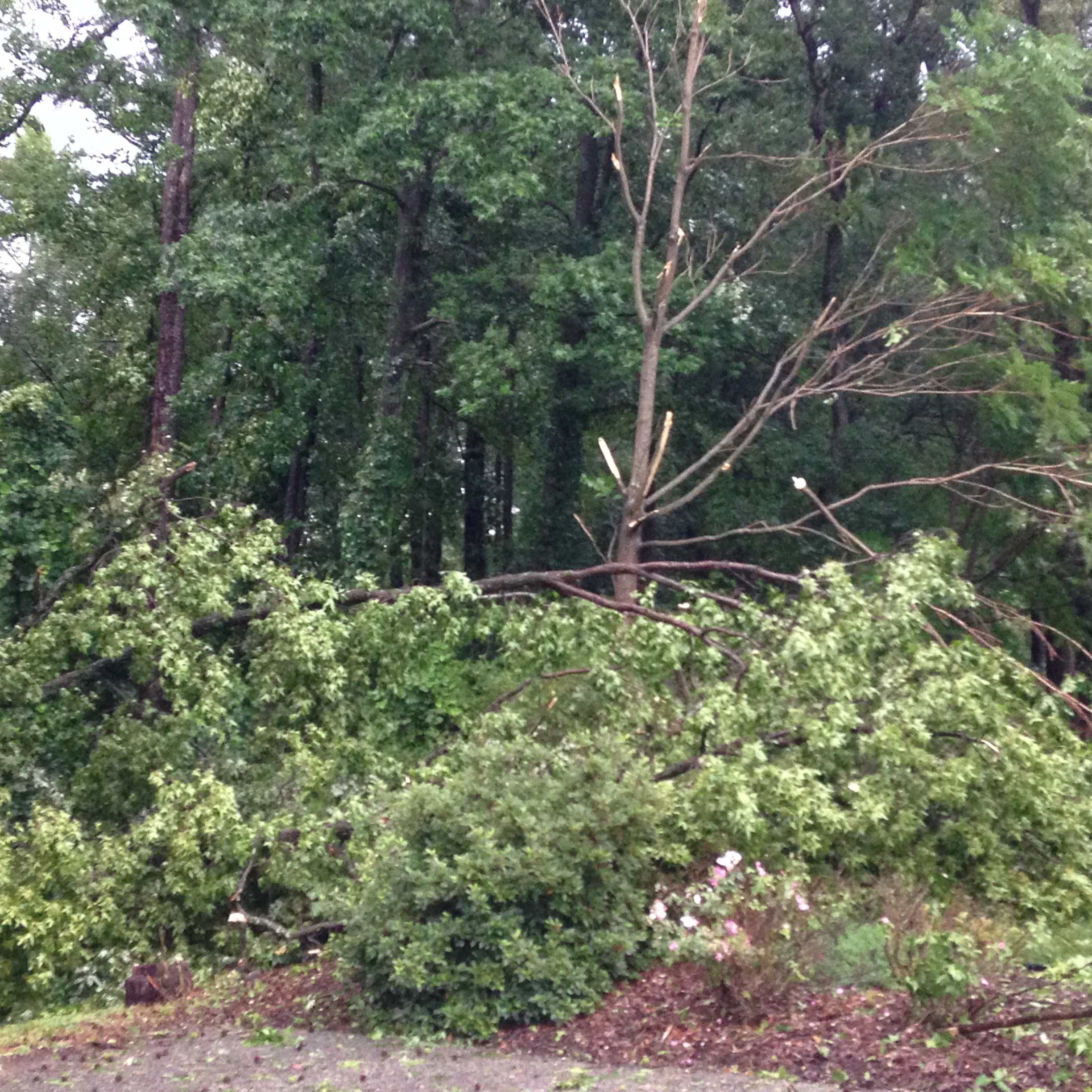 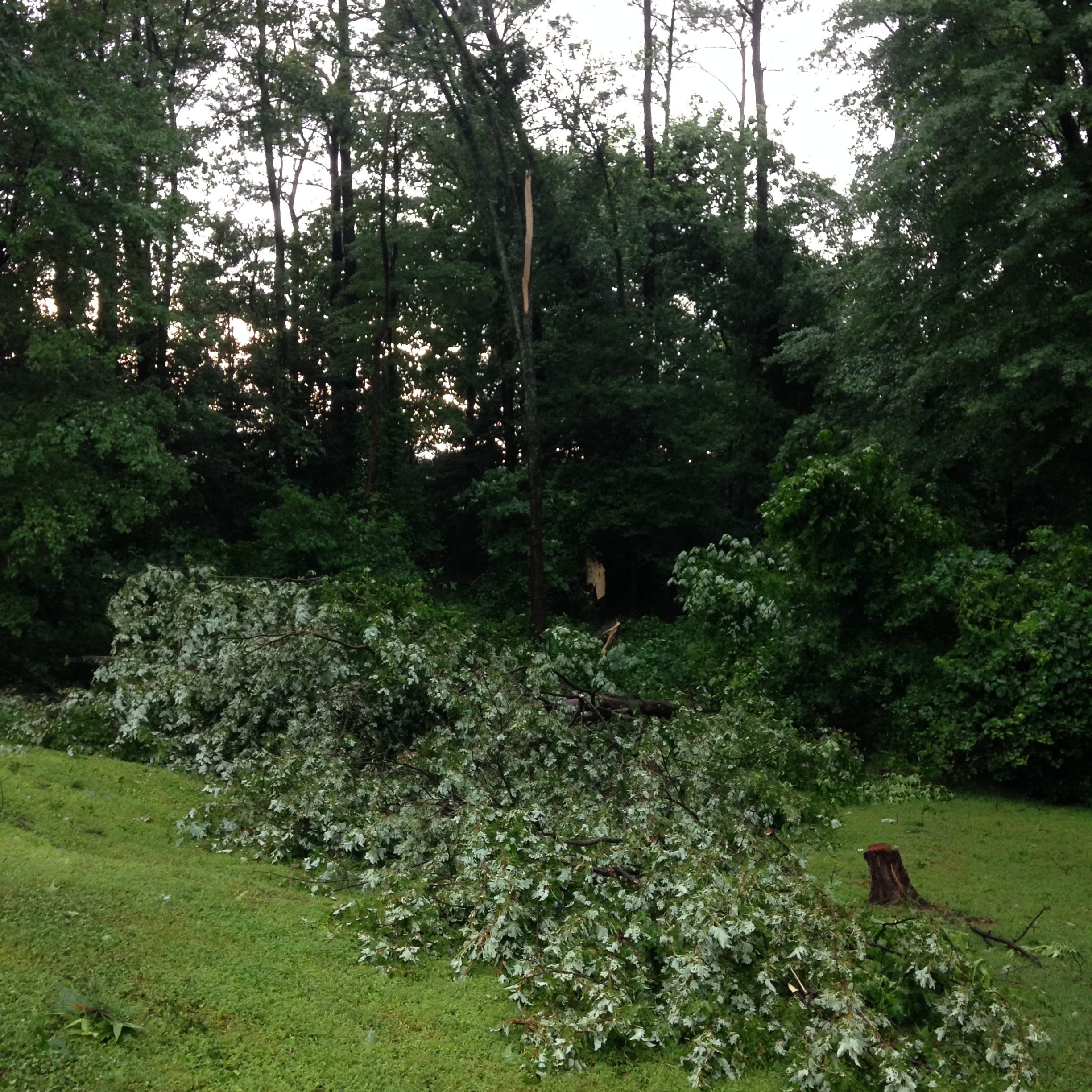 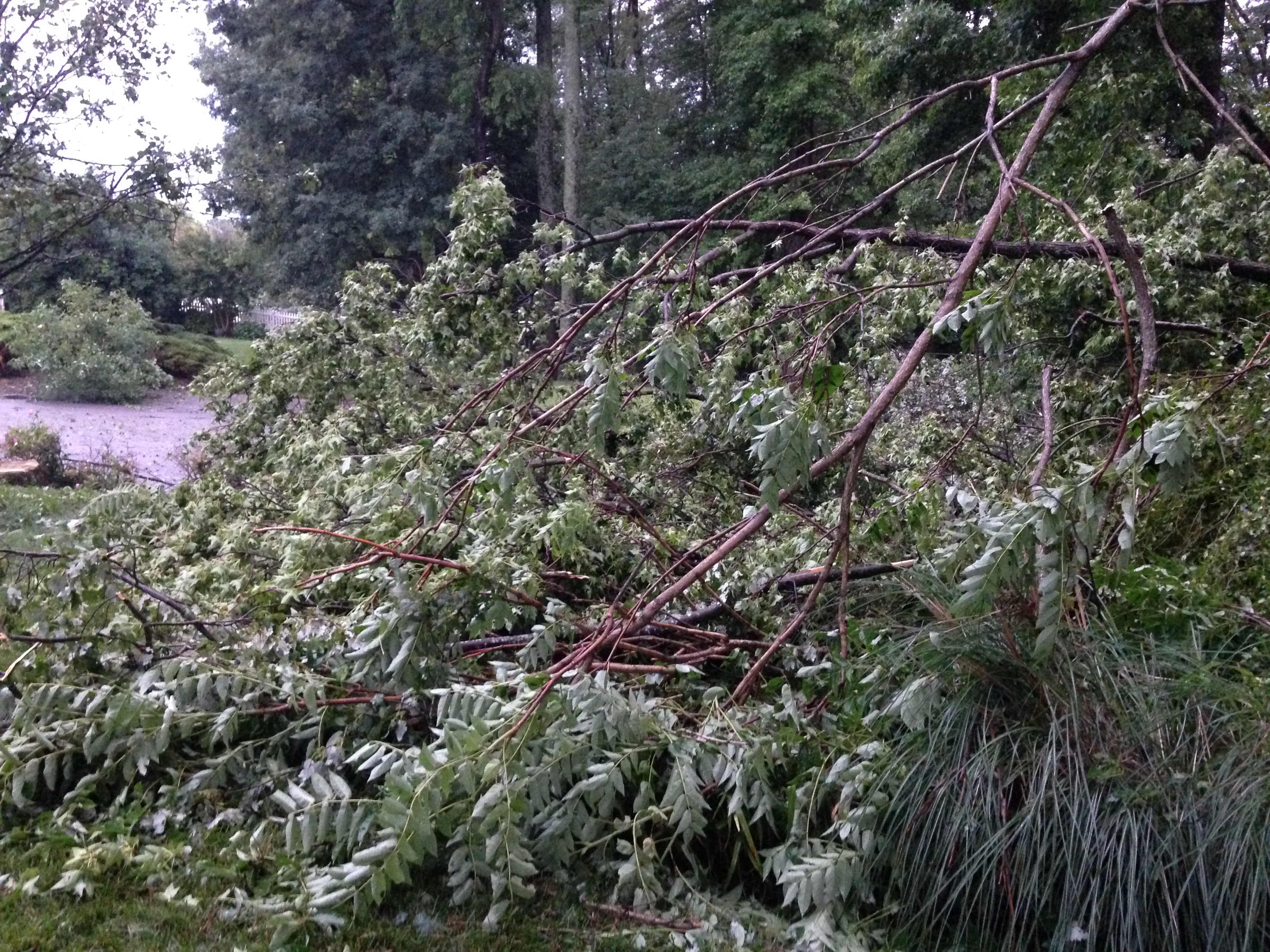 To put this in perspective, here is a comparison of one section of my yard before and after the storm: 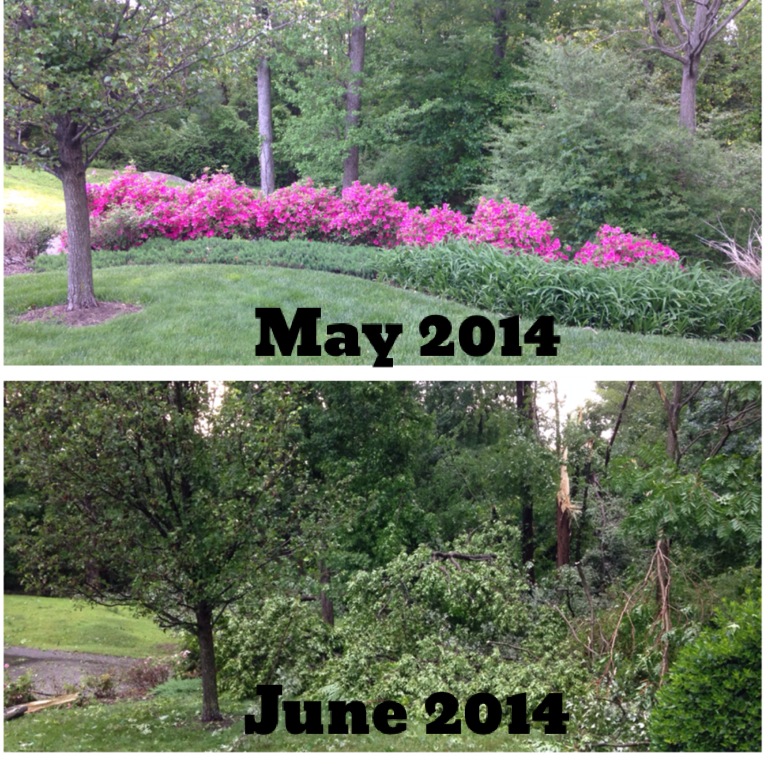 Crazy!!  There was a now a straight line of trees brutally torn apart in the woods beside my house.  For the first time ever, we could clearly see the summer sky through a section of our woods.  A tornado perhaps?  Well, maybe not by the finite definition (after all, there were still trees attached to the ground), but the amount of debris and destruction embedded in the soil of my yard might support the theory that we had something fly through our woods.

The next day was sweltering hot with temperatures in the upper 90’s and humidity higher than that.  My husband had landed on the other side of the country and I was here, comparing storm stories with my neighbors.  I was thankful, as there was no damage to our home, only to the landscape.  My mom’s husband, Bob, came by with a chainsaw to help cut away the fallen trees. 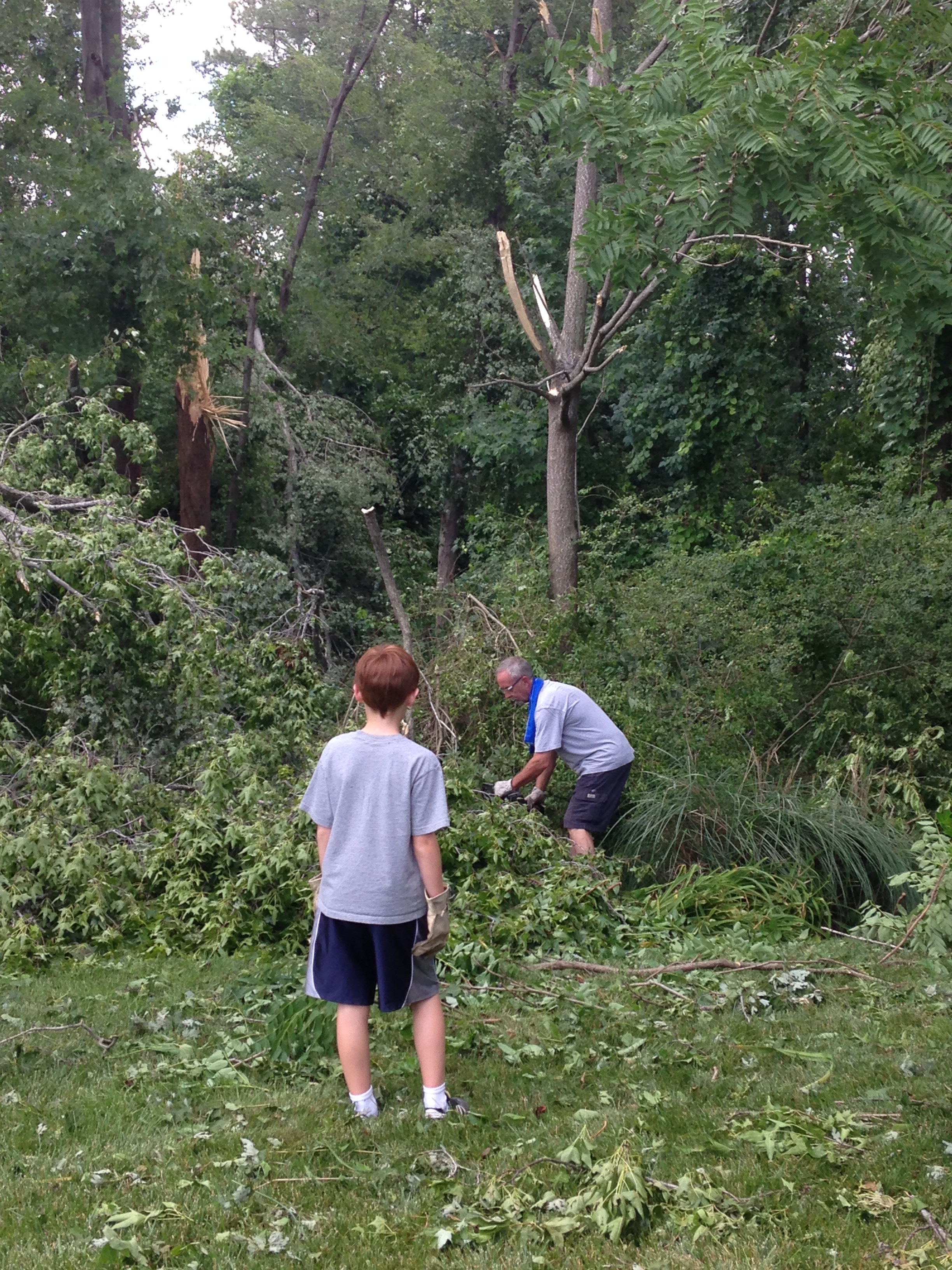 An hour later, we had a huge pile of tree limbs, but had barely made a dent in the destruction.  It was apparent that this would be a work in progress, best saved for a slightly cooler day!

As the sweat continued to stream down my face, I hopped in my car to pick up my daughter from her youth group trip. It was SO HOT outside!  I had a renewed respect for anyone that worked outside in the summertime.  As I made my way down the side streets, I was reminded how lucky I was to still have power as I watched a Dominion Power truck carefully lifting men to fix power lines strewn across the street.  I slowly passed the truck, careful to look for other workers standing nearby, then a thought crossed my mind.  “Wouldn’t it be an awesome surprise to bless those men with some fresh, cold lemonade?” My brain immediately began a battle of dismissive rationalization.

“There’s no time to go home and make lemonade – you have to pick up your daughter.”

“If you stop at a grocery store to buy bottles of lemonade, you will have to drag both boys out of the car…”

“By the time you buy lemonade and head back, they will probably be gone anyway.  Nice thought, but don’t bother.”

My daughter text only supported the naysaying voices in my head: “Running late…. it might be awhile…”

The proverbial fork in the road of decision making.  Oh, how easy it would be to keep driving and not worry about the lemonade. After all, it was just a thought, right? But wait. Was it just a thought, or a small whisper on my heart?  You already know the ending to this story. 🙂

Since my daughter was delayed, I made good use of that time and drove through a Chick-fil-A drive-thru to purchase four lemonades.  (After all, if we were giving away lemonade, we were going to give them the best!) 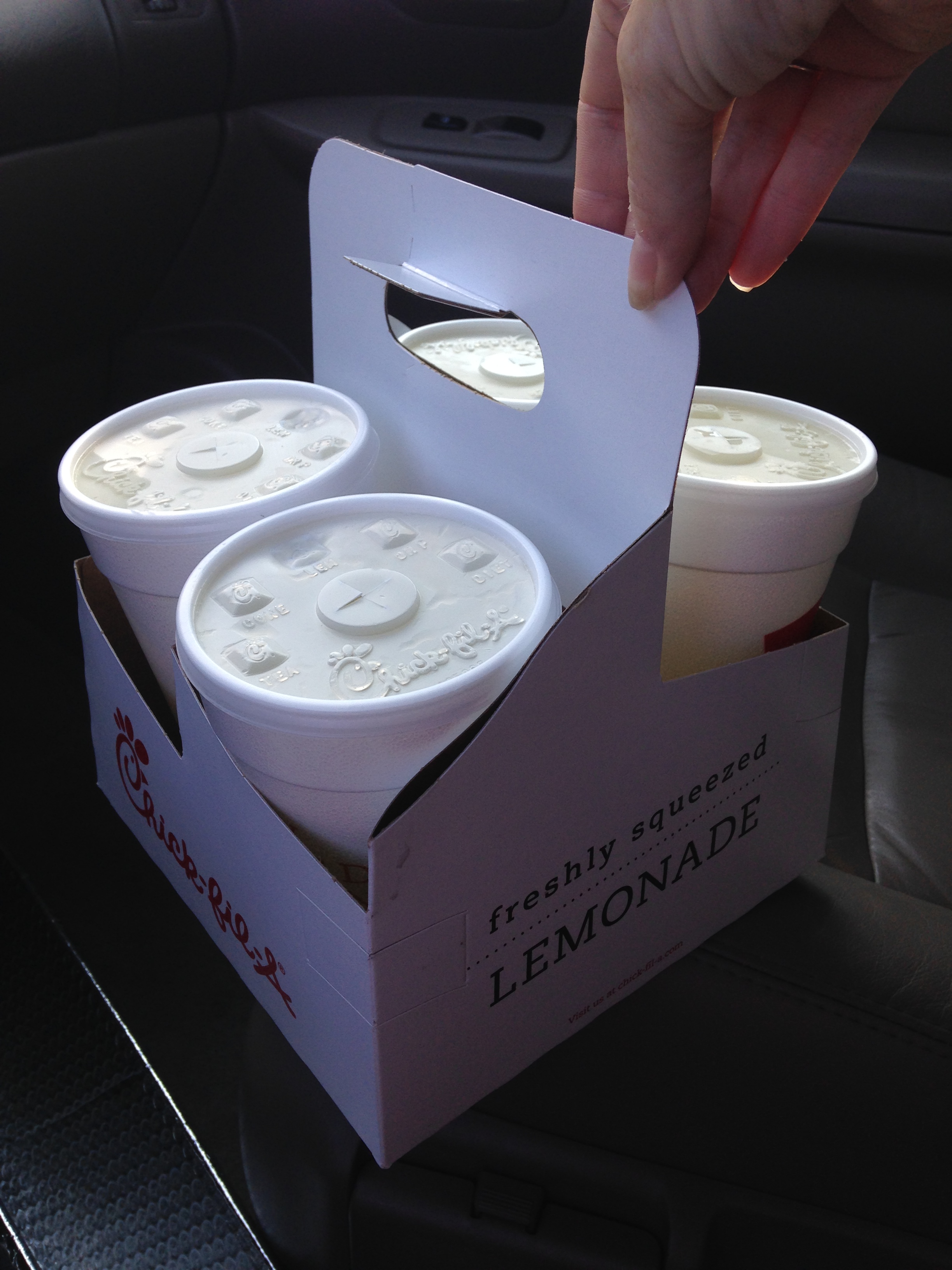 After my daughter arrived, we drove back to the side street and lo and behold the Dominion Power workers were still there, taking a rest break.  Perfect timing!  I quickly parked my car and walked towards them.  “Y’all look like you could use some cold lemonade!”  Their surprised smiles quickly cut through the stifling heat.  “I wanted to do a random act of kindness to say ‘Thank You’ for all your hard work restoring power to everyone.  We appreciate all you do, especially on a hot day like today!”  I handed them the drinks and straws as my daughter captured the moment from inside my car. 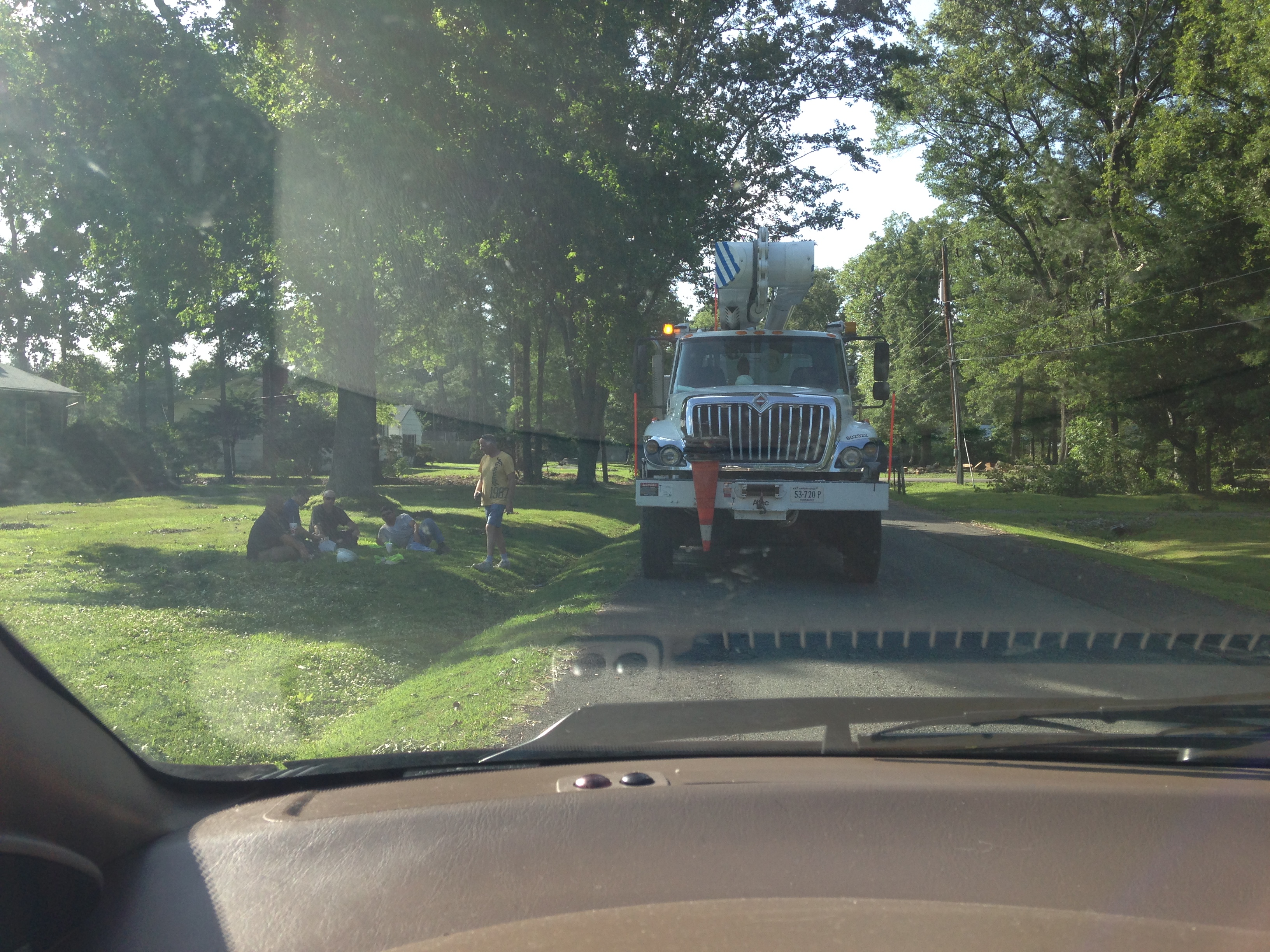 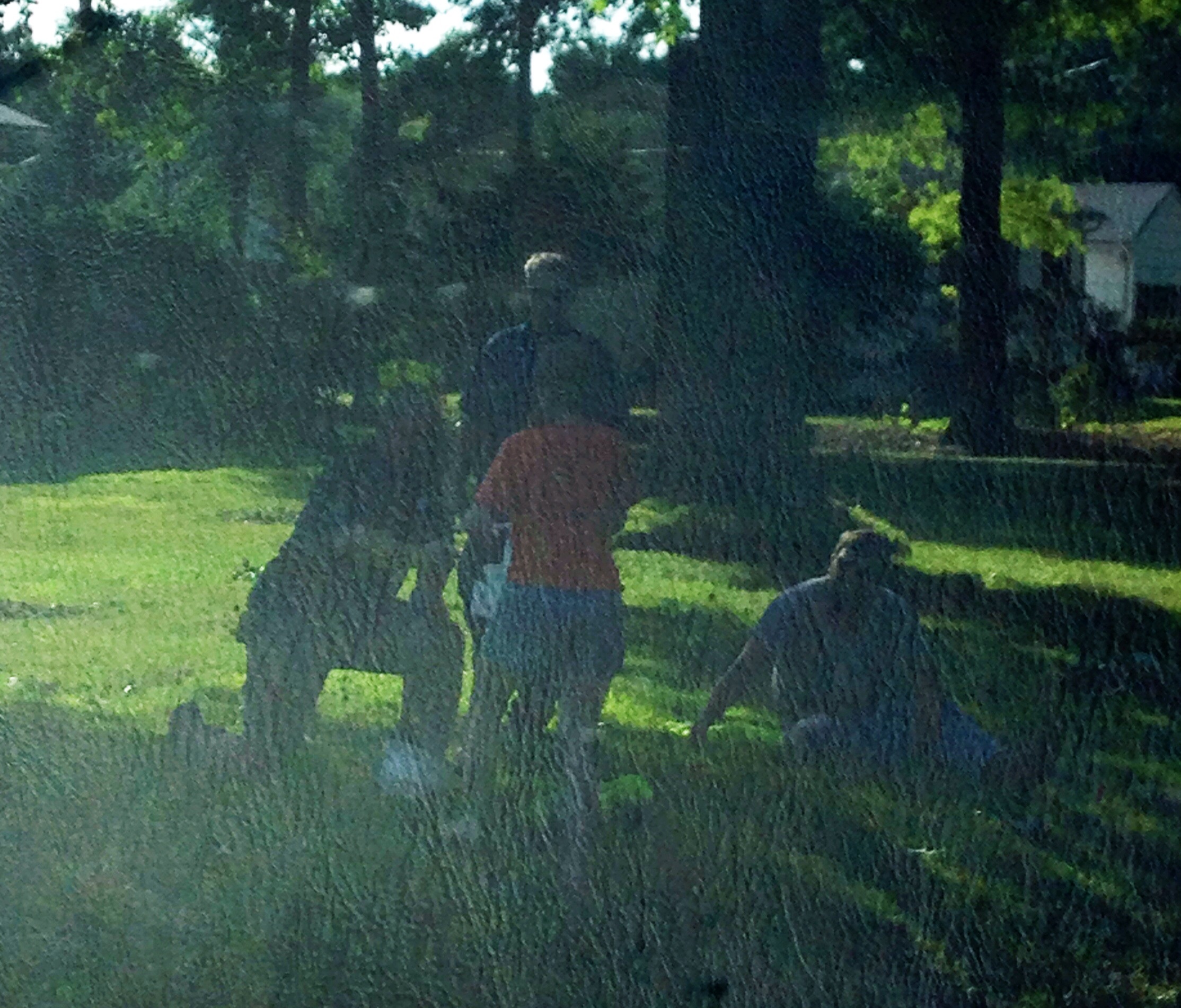 My interaction with the men was less than 2 minutes, but their appreciate words carried me through the rest of the day.  I am so glad I listened to my heart and not my head! The next time you see someone working hard outside in the sweltering heat, bless them with a cold beverage.  It will cool their thirst and remind them that there is still good in this world.  🙂

Be blessed and continue to celebrate kindness!