Last weekend as my husband and I toured the city of Washington, D.C., we spent several hours paying our respect to the fallen at Arlington Cemetery. 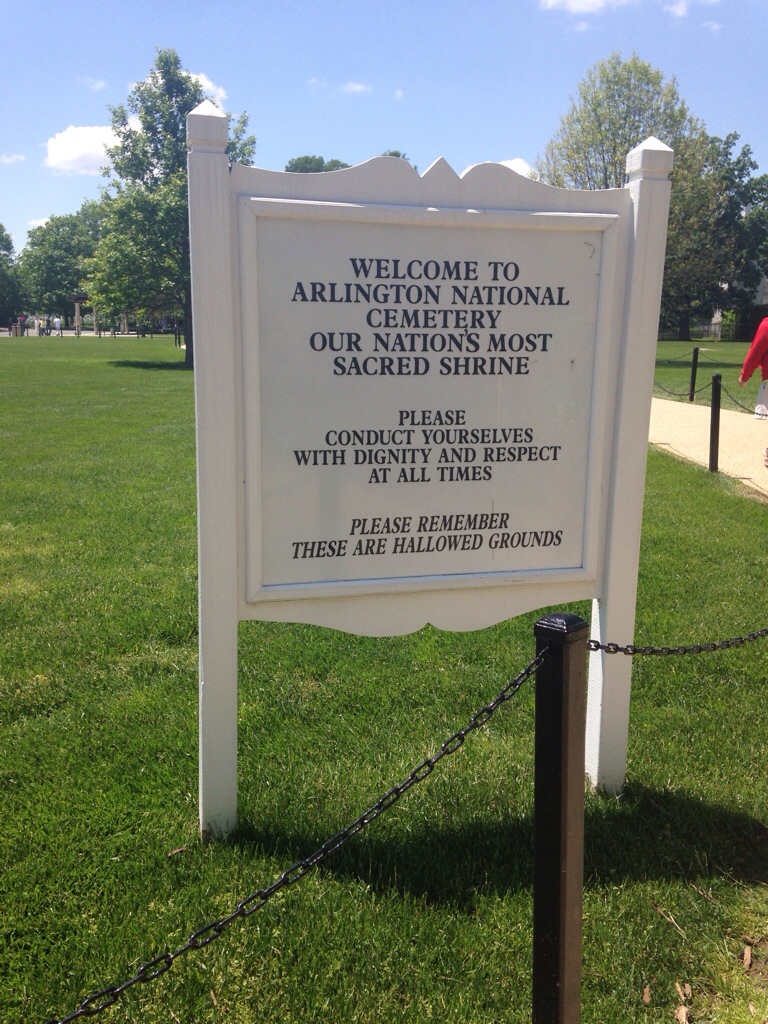 Words cannot do justice to the emotions I had walking through this place, seeing row after row of perfectly aligned headstones, chiseled marble glistening in the warm sunshine. 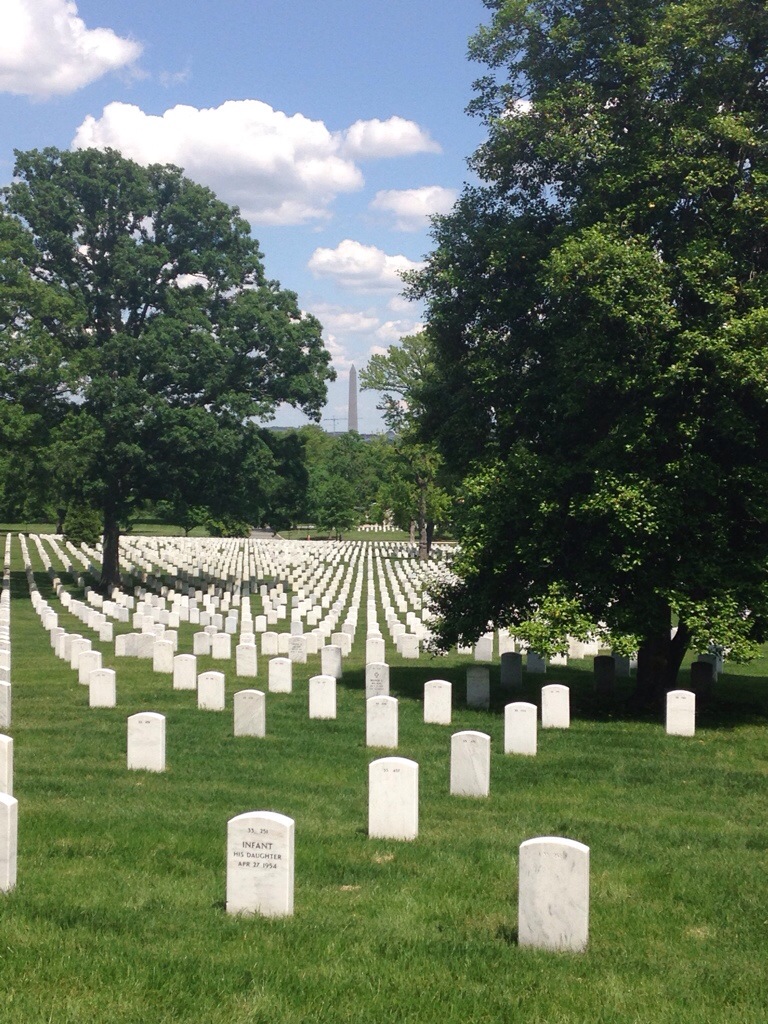 Fathers. Sons. Boys. Babies. So many lives lost all in the name of freedom. Yes, there were women laid to rest here as well, but I was overwhelmed by the sheer mass of men whose lives stared back at me with simple timeline markers of birth and death.

The day before, I had toured the Smithsonian American History Museum which grouped their artifacts and stories chronologically by war. The American Revolution, fighting for our initial independence from England; the Civil War, fighting for equality (a struggle we still embody in various levels today)… world wars, cold wars, foreign wars… so much blood shed in the name of freedom.

Like many of you reading this blog post, I was raised in a time where war was a subject you studied in History class. Although there were global conflicts raging throughout my childhood and teenage years, I was greatly protected in mind, body, and soul from such horrors. Call me naive, sheltered, unaware (all of which carry a sliver of truth)… War just didn’t impact me then the way it does now.

I have family members who have sacrificed their time serving our country. My grandfather. My father-in-law. My husband. Cousins. Friends. I don’t think the reality of loss in combat truly affected me until I lost someone I knew. Ten and a half years ago, as I was flipping through my hometown newspaper to find my baby’s birth announcement I saw one of my elementary school classmates listed in the obituaries. Talk about incomprehensible. The day after my baby’s life began, my friend’s life was over, all because his commitment to freedom included the risk of death.

It was in that moment right there, holding my hometown newspaper, staring back at that baby-faced boy-turned-man, that I was humbled. Crushed. Educated. Never, ever, would I be the same.

We all have those pinnacle moments when time stands still, and our memory is frozen in time. For me, it will always be the death of JR. I wrote his mom a card and included a photo of my infant son, Daniel, thanking her for her son’s sacrifice and sharing my favorite memories of this amazing guy who always loved to make people laugh. If it wasn’t for JR and the hundreds of thousands of boys before him, I would not be able to sit here today, sharing my simple thoughts on Memorial Day.

Which brings me back to present day and my visit to Arlington Cemetery. As I made my way towards the Tomb of the Unknown Soldier, I was in awe of how many veterans were sharing the same path. Dozens of older men, gray hair peeking from faded blue ball caps marked by their various military units, being pushed in wheelchairs towards the same destination.

As I turned the corner of the path, I realized one such veteran was beside me, so close that I could practically reach out and touch his shoulder. The smile on his weathered face radiated one simple emotion: pride.

I don’t know what struck me in that moment, but without hesitation I turned to the veteran beside me and leaned down towards his ear. “Thank you for your service,” I whispered with a smile. It was only five words, but oh, the weight those words held. I wasn’t just thanking him, but I was thanking JR and all those who came before him for the sacrifices they made for our country’s freedom. 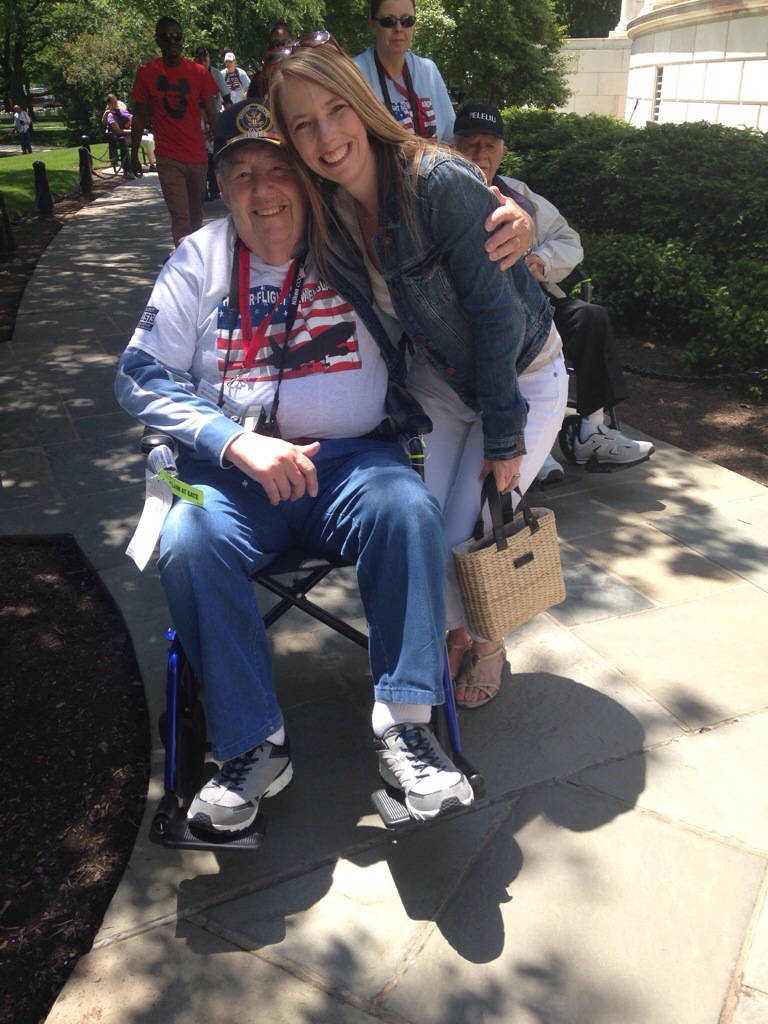 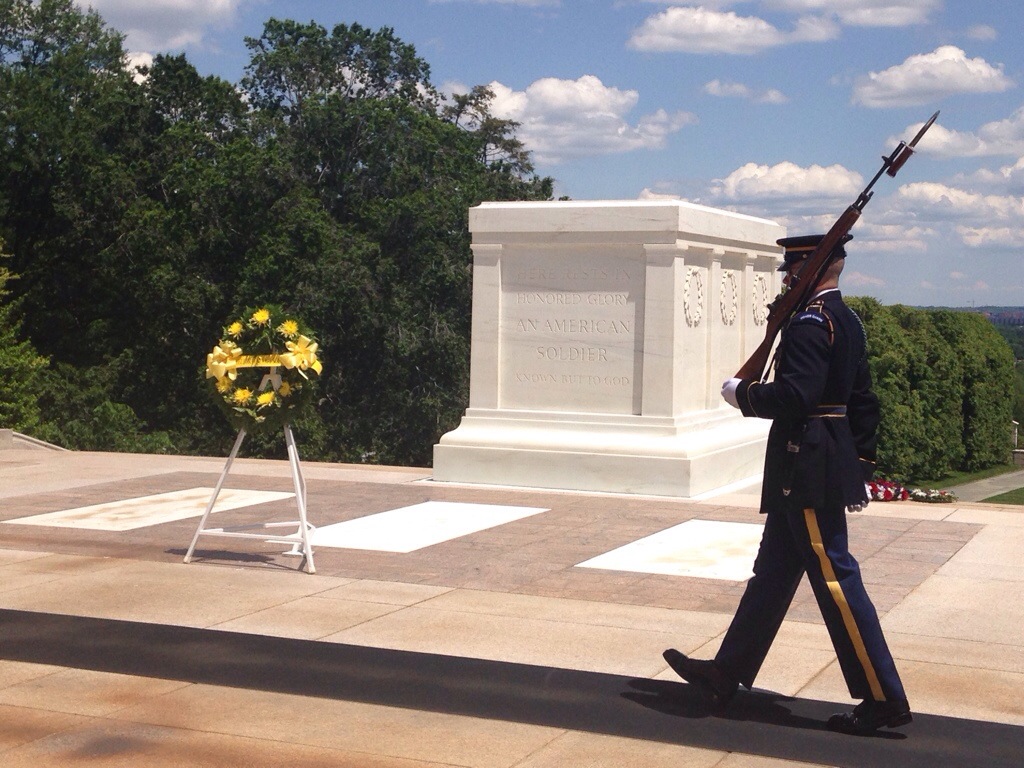 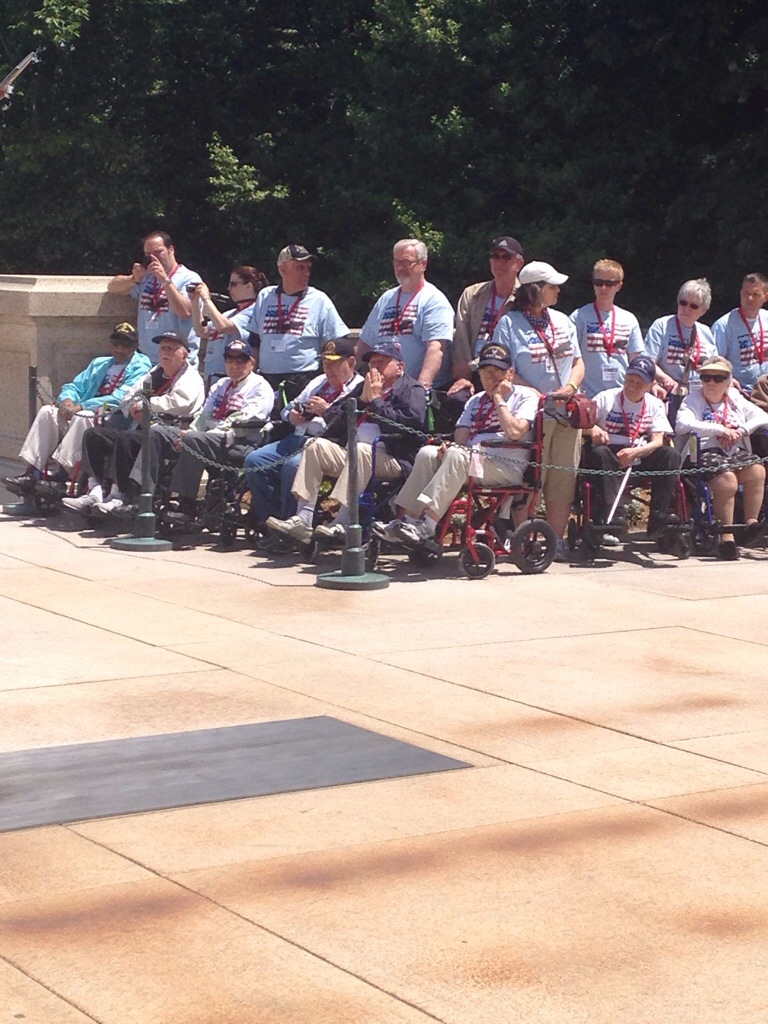 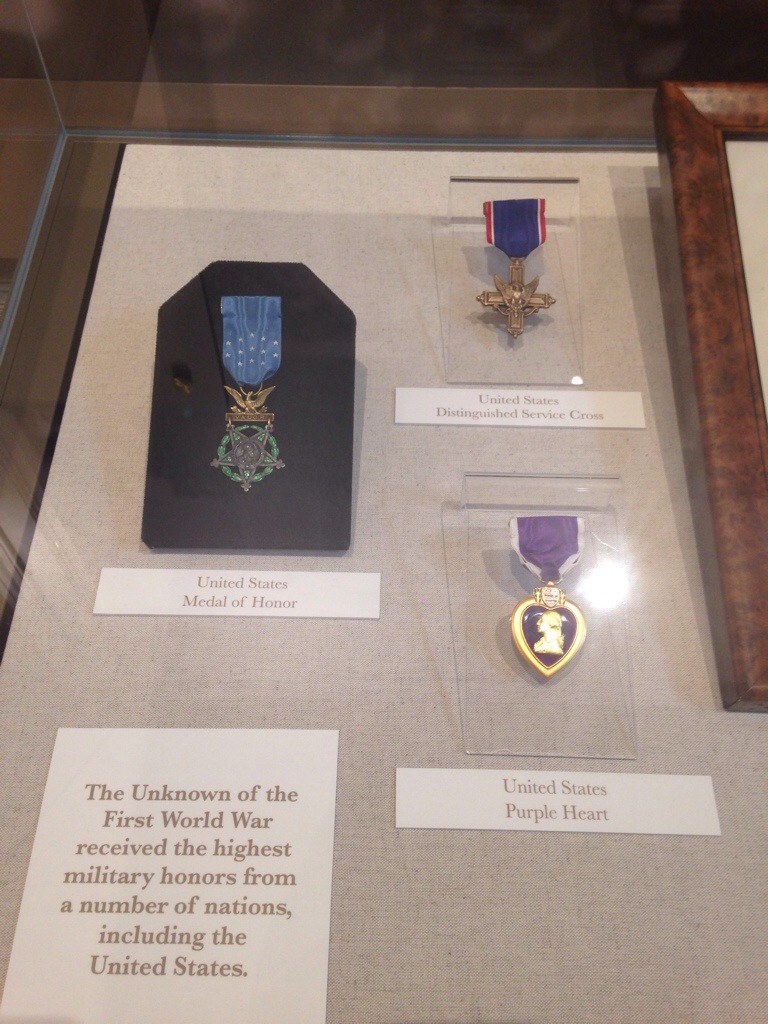 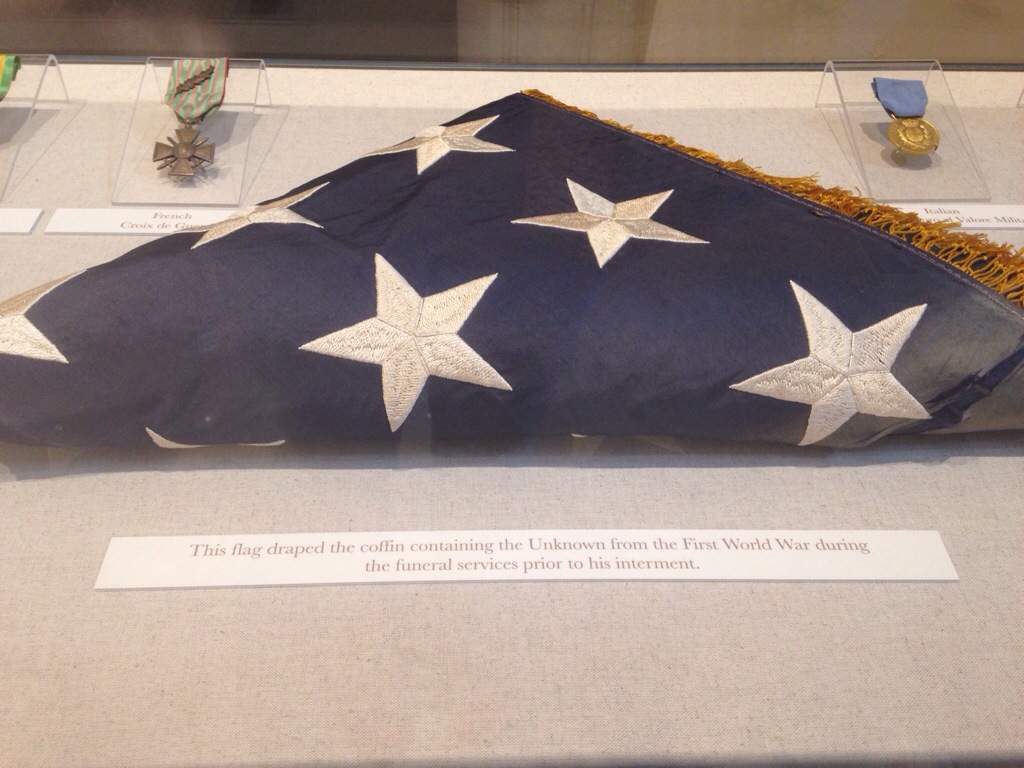 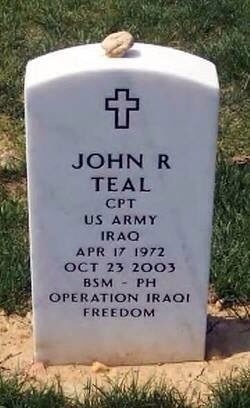 This morning as my family stopped by a Dunkin’ Donuts on our way to meet friends at the beach, I saw a small group of older men, chatting animatedly in the back corner. One man’s ball cap caught my eye and I had to chuckle. Here was yet another opportunity to be kind to a veteran.

So what did I do? I bought them a box of donut holes, shook their hands, and thanked them for their service as my ten year old did the same.

Respect is learned through the words and actions of others. I hope if you see a veteran today you will be inspired to say “Thanks.” It’s the least we can do. 🙂