How do you like to celebrate the 4th of July?  Do you go to a cookout?  Plan a day at the pool?  Spend time with friends and family?  We do different things each year to celebrate the national holiday, but one thing we always try to do is watch the fireworks.  I love being out with a crowd of people, listening to patriotic music played by a concert band, waiting for darkness to fall and the first firework to light the sky.

This year as we claimed our spot in the open field of Dogwood Dell, we watched as people spread out blankets, played games and chatted, all sharing the same space for the same purpose, a united group of strangers.  If you’ve ever waited for fireworks, you know it’s best to claim your spot early, so we were there hours before dusk.  As soon as I started to unpack our chairs and bags, I realized we had no games for the kids to play to pass the time.  No cards.  No UNO.  No triominoes.  Nothing.  Cell service wasn’t that great, so the games we had hoped to play on our phones and iPods quickly became obsolete as our batteries dwindled faster than the evening shade.

It was about this time that we saw a single bubble floating in the sky.  One.  Single.  Bubble.  We watched in awe, completely transfixed, as it began its gentle descent across our blanket.  >pop< “What…?”  “Where…?”  “Who…?”  The questions tumbled out as everyone tried to figure out who was blowing bubbles.  It didn’t take us long to see a girl with long brown hair and a red skirt, standing with a lady who was probably her mom, both blowing bubbles from huge wands dipped in liquid tubes.  Before I could answer a single question, the kids were up on their feet, running towards them, as more bubbles came our way.

Oh, to see the joy on my children’s faces!  I glanced towards the girl and her mom and both had smiles that would brighten even the darkest of days.  Children were laughing, shouting, chasing after bubbles on a warm summer night, oblivious to any cares or worries of this world.  It was perfect!

The mom noticed how engaged we were with the bubbles and offered her wand to my son, Daniel.  “Would you like to blow some bubbles?”  Daniel graciously accepted the mom’s offer and together with the daughter, they blew bubbles for all the children surrounding our blanketed space. 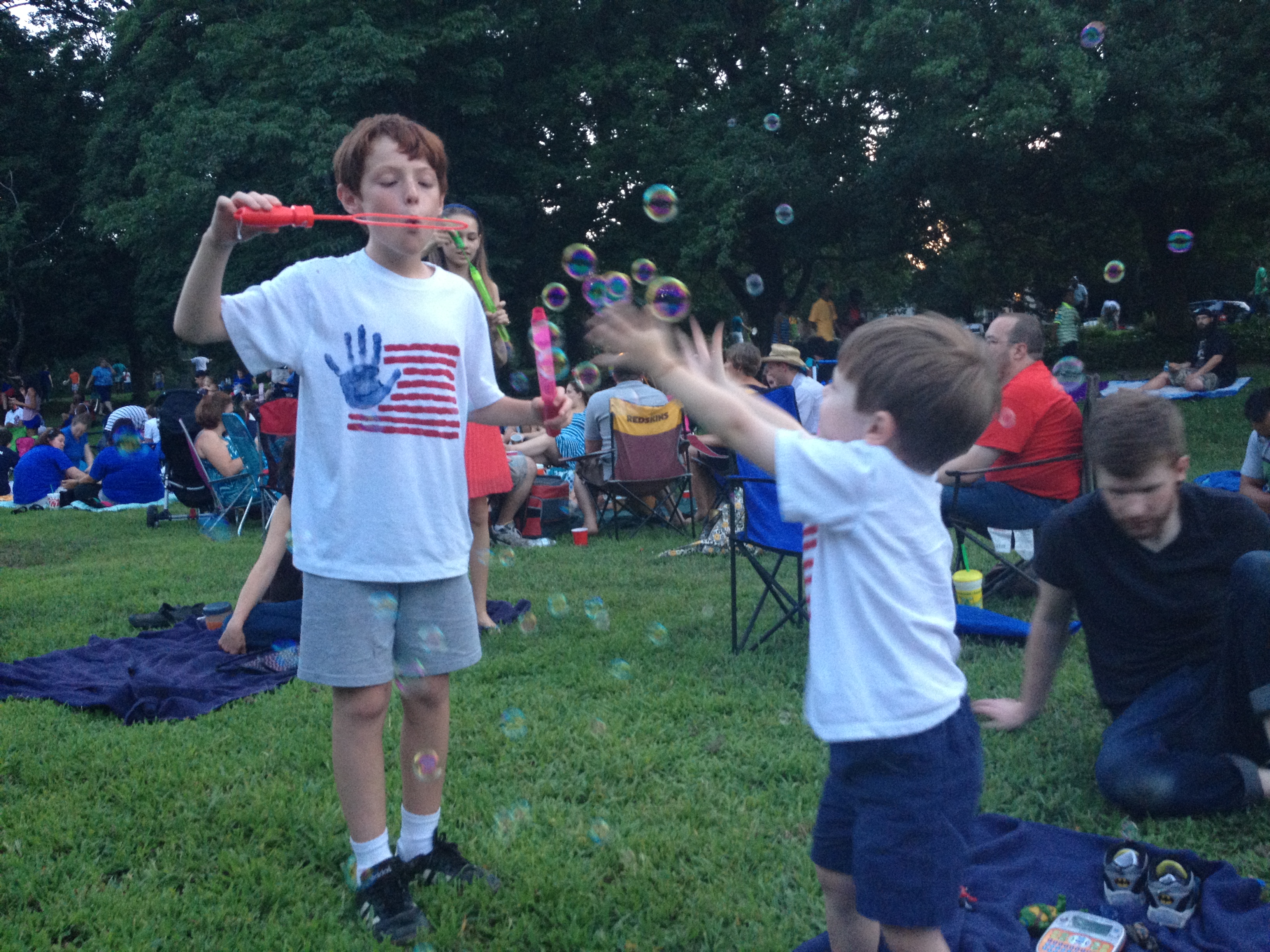 Daniel passed the wand to his Uncle Barry, who then became the Pied Piper  of Dogwood Dell, showering the children with bubbles galore. 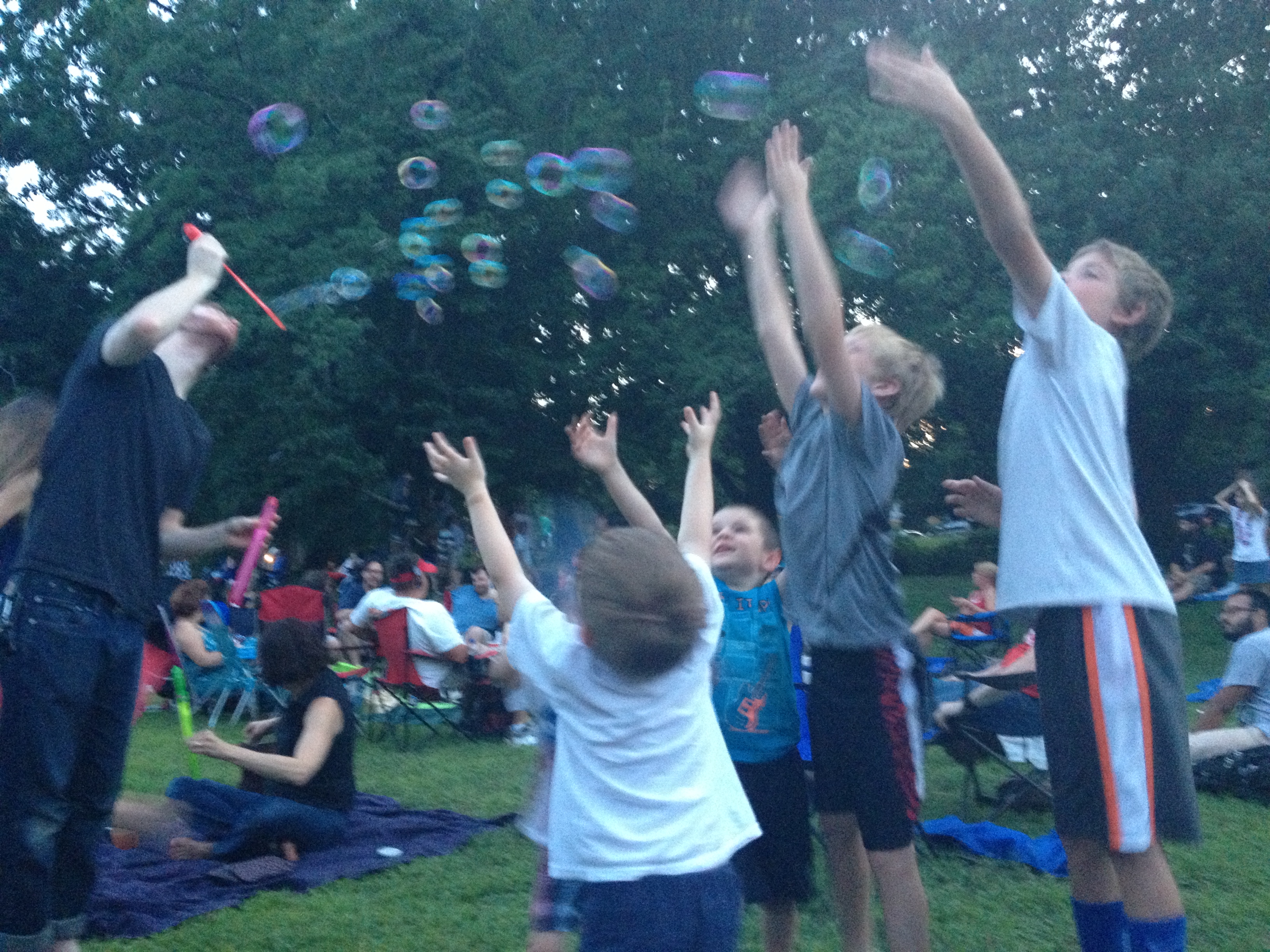 Not long after the bubble fest, the sun began to set and we were surrounded by twilight.  “The glo sticks!” my daughter shouted, as she dug through her purse to reveal four unopened black canisters.  “Hurry!  It’s getting dark!”  She dumped all four tubes into her lap and together as a family we worked together to bend the sticks, releasing their fluorescent glow. 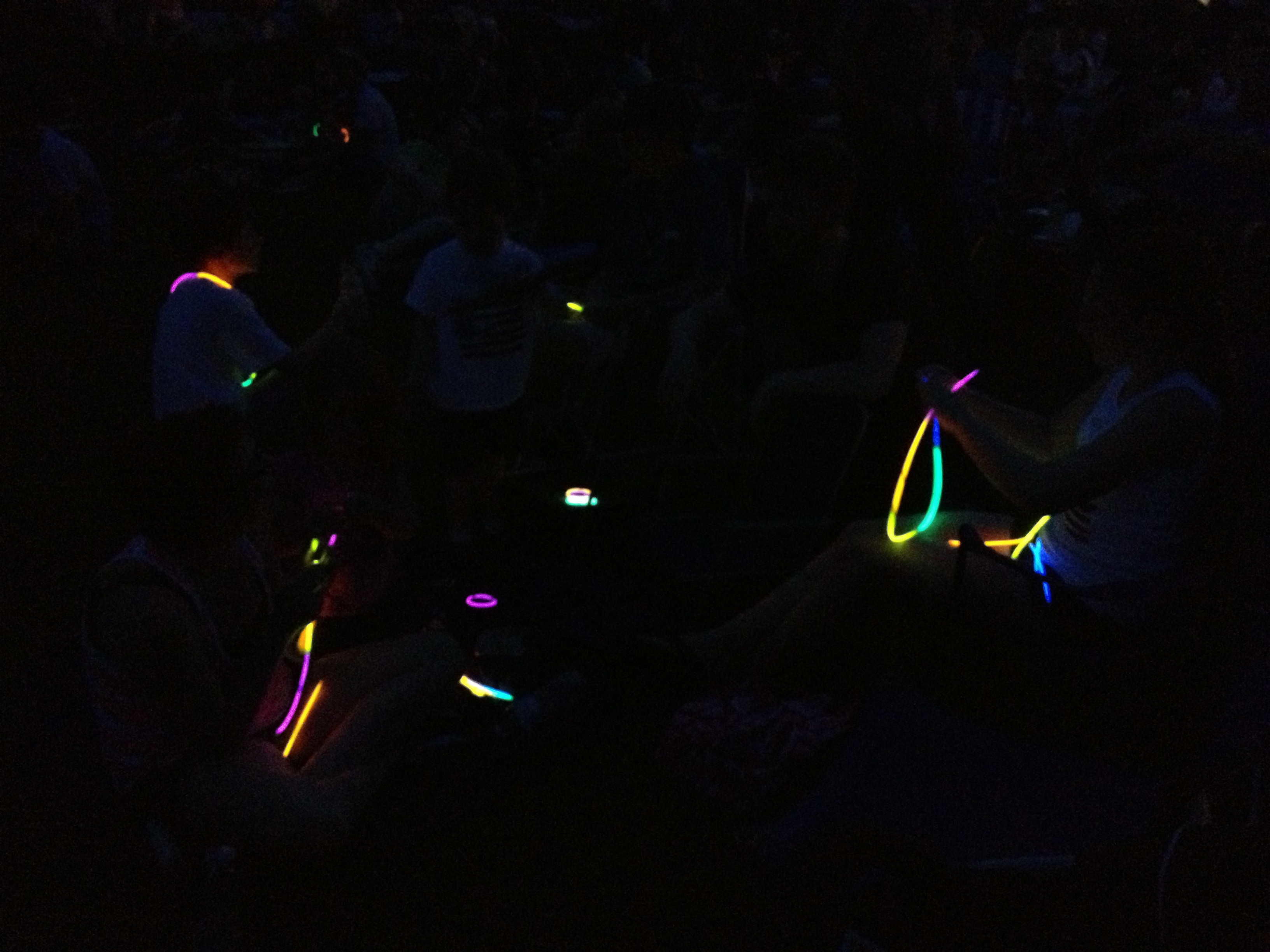 As we were creating bracelets and necklaces connected by small plastic tubes, we noticed a young boy watching us from his parent’s nearby chair.  “I wish I had some of those,” we heard him tell his dad.  I looked at my daughter and was met with her smile.  She had heard him, too.  “Would you like to have some?  We have plenty.”  She then carefully selected one of each color and attached connectors so he could create his own glowing accessories.  “Have fun!” she said as she turned back in her chair and continued her task.

Could I possible love my daughter more than in that moment??

Our evening ended with an amazing fireworks show and we left Dogwood Dell with happy hearts.  It was a wonderful way to celebrate our country’s independence, surrounded by friends, family, and many strangers.  We were blessed by kindness of others and found a way to keep that blessing going to someone else.  Who knew something as simple as bubbles and glo sticks could make such a lasting impression?

This Random Act of Kindness is dedicated to Benjamin Wheeler, age 6.  According to the Huffington Post, Benjamin was always running, a joyful child, who blew kisses to his family saying, “Catch it and put it in your heart.”  His parents were musicians and would write and perform their own music.  At Ben’s funeral, they played songs from a CD they had released right before he was born, one which was titled, “Stars in the Sky.”  On this night, long after the fireworks show had ended, I looked at the sky as we were walking to our car and thought about all those beautiful stars and all those beautiful children from Sandy Hook Elementary.  A lump filled my throat as I looked at my own three children, healthy, happy, still bouncing from the excitement of the evening.  It made me realize, yet again, how special EVERY moment should be; how I need to be still and treasure the small moments as well as the big.

If we are not guaranteed tomorrow… what can I do to make a difference for someone today?